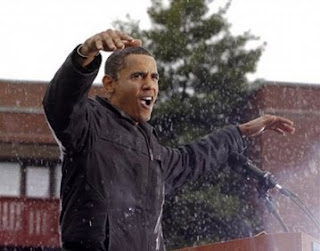 Hoof in mouth again. The White House, on its website (which I won't link to here, given the enemies list they are prone to gathering) has a link to the remarks he will make to K-12 students in the US public school system tomorrow. (Well, the ones who haven't already opted out, anyway.)
In it, in addition to urging the little urchins to wash their hands, he says:
"I’m thinking about Andoni Schultz, from Los Altos, California, who’s fought brain cancer since he was three. He’s endured all sorts of treatments and surgeries, one of which affected his memory, so it took him much longer – hundreds of extra hours – to do his schoolwork. But he never fell behind, and he’s headed to college this fall. "
But be aware his creepy "Health Advisor" Eziekiel Emmanuel, the thug brother of his thug chief-of-staff Rahm Emmanuel said in the British Lancet earlier this year:
"When implemented, the [']complete lives system['] produces a priority curve on which individuals aged roughly 15 and 40 years get the most substantial chance, whereas the youngest and oldest people get changes that are attenuated...Adolescents have received substantial education and parental care, investments that will be wasted without a complete life. Infants, by contrast, have not yet received these investments. . . . ." You'll have to register to see the article, (free), but you can see the complete article here.
But what do I know? I'm just some useless, soon-to-be 53 year old.
H/T to Economic Policy Journal
Posted by gemoftheocean at 11:01 PM

I still say he's the anti-Christ

We know nothing, zero is supposed to be all powerful, though in better news, supposedly they've finally found his kenyan birth certificate :)

Joe, where was it? Hillary Clinton's files next to her future's trades records?