Conga Drums do NOT belong in church 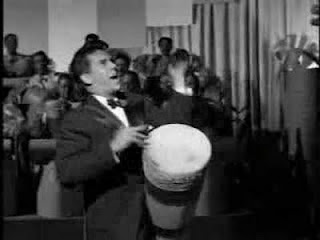 ...particularly mine. I don't care if Ricky Ricarrrrrdo is playing them. I don't know what possessed the pastor to think a "folk Mass" should be in order for a 5:15 on a Sunday. Ever since he retired the former supply priest (of 30+ serving years) he has been trying to "remake" this Mass over. About two months ago he decided that once a month we would have the Cursillo people do a folk Mass. We normally have a cantor and an organist. Last we we had a beautiful rendition of Panis Angelicus. Sometimes we get lucky like that.

This Sunday NO ONE SANG the entrance song. [He pastor suddenly decided we "need" a folk Mass on the 1st and 3rd Sunday of the Month.] Right at the top of Mass, Father decided it would be a good idea to castigate the congregation for not singing after he'd gone through "all the trouble to arrange for a folk Mass." Then he whined that people had opened all the doors after we'd cranked up the AC. Then he said "Well, I'm off to a great start." People laughed nervously.

Afterwards, the head cantor told me that they were so busy setting up everything, she did not have a chance to change the song numbers. Duh. I sometimes think the Holy Spirit has to do His work under duress.

There wasn't one song that wasn't in a sappy, treacely setting. "Sun Dresses" do not belong in the sanctuary either.

(update: Dear Stephen sent me a link to this video on Facebook. Have to include it here, because I can TOTALLY see this being used for the recessional next hootenany Mass. It would be a vast improvement!]

(Stephen, you DO realize that every 1st and 3rd Sunday, I will be thinking "conga" whenever I hear the beat-beat-beat of the Tom-tom, regardless of jungle shadows falling or not.)
Posted by gemoftheocean at 3:52 AM

I've played at "folk masses" before. But then the 80's came.

Exactly. he thinks "young people" will be attracted to music that was so "over" well before they were born.

The young want the traditional stuff. Not the happy clappy stuff.

Exactly. [BTW, the cantor last week was a different one from this week. The flute I can deal with. "Keyboards that sound like pianos" I can deal with. But. Not. Bongos. I suppose I can be thankful there weren't any guitars.

Your priest sounds like he's having a nervous breakdown. Seriously!

We went to high Mass at FSSP. The schola was wonderful...

I thought "Folk Masses" was something bad that we in UK imported from USA :-)
You have my sympathy...well just a little bit!

May be time to introduce your shoemaker to your priest's tailor...."with love" of course! and tell him "I hear what you are saying"!

On behalf of the Church in the US, please accept my abject apologies for the atrocity inflicted on the people of the UK.

Was there perhaps a fleet of Brazilian sailors attending this particular mass?

Stephen, perhaps next time I will just have to hum "Pernambuco" to myself! Come to think of it I can probably hum quite loudly, given those damn bongos.

Or bring my kazoo, since he is asking for MORE musicians from the congregation. And somewhere around I have a quite nice "G" Harmonica. Perhaps he'd prefer that to the bells at mass?

I honestly prefer, at least in theory, the Mass versus populam. HOWEVER, there are a few priests I'd love to force to only say it "ad orientem." ["Uh, no, not YOU, buddy. You don't have my express permission to face anyone or anything but the back wall...."]

I have taken to the idiosyncrasy of looking towards the crucifix when he goes "off the rails."

Fr. Erik,
sadly the reality is that church here as a friend once said "imports a lot from the States. Sadly we seem to import the worst!" :-)

I feel your pain! My parish decided to have a first friday mass for the youth group every month, with "folk music for the young people".It was painful to watch, because no one participated.
Luckily, we won't be doing that this year.Not never, because I've been asked to be in charge of the music.