Old Missals Made New (or is that Anew?) 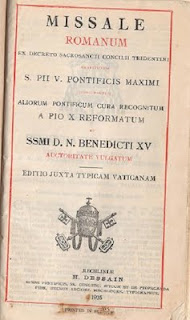 I don't know about you, but I love to use things that are "old." Or relatively so. If I have a choice of using my grandmother's coffee mug instead of a big plastic tumbler, I'd use the mug. I'm that kind of a person. A bit of a packrat, but I'm sentimental.
For quite a long time (at least since the early 90s) I've had a small, 99% Latin Roman Missal, published in Belgium, 1925. I like historical things. And I like Latin. So when a former pastor mentioned that they were getting rid of boxes of books that had been hanging around the rectory and he'd invited me to pick out anything I wanted, I snapped this up.
But this last year, particularly the last two months, I've been getting a chance to actually use this missal. A lot. The leather cover is kind of fragile around the edges, and the original owner resorted to a little cellophane tape here and there, but pages overall are quite servicable. (Though the front endpapers were badly damaged and I had to resort to some more tape myself to prevent further rips!)
Although I did buy a 1962 brand new Baronius Press missal, which has all the latin and the translations, I find for actually USING the missal at Mass, this little '25 hand missal is usually my "best choice" for "real time" use. The type is quite small...so bets are off if the lighting is poor that day, or if there's a smudge on one of my contact lenses. But I like this missal precisely because it is so much less "flippy." 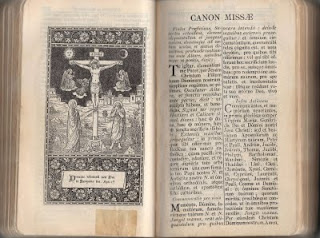 For instance, from the "Te Igitur" (the start of the Canon) to the "Hanc Igitur" there's only ONE page. The new Missal requires THREE pages. The '62 missal has a lot of print I have to skip over (explanations, etc.) and I'm constantly flip, flip, flipping every 30 seconds or so. But with THIS 1925 beauty, there are relatively few pages to flip. [Granted this one canon page is a bit of a cheat, because for some times of the year, I have to look at the preface section that had a special communicantes and possibly special Hanc Igitur, depending on the season.
The book is short on illustrations, the above crucifiction scene, besides the title page, is about the only one. It's got a few drawbacks (like I DO have to use the newer missal to make sure I understand all the Latin, but that's not ITS fault!) the main one being that a few of the Mass propers have changed or a feast has occasionally moved, and a few masses aren't there at all (notably the Immaculate Heart of Mary -- because it hadn't even been written yet) and people who weren't saints yet, or on the calendar just yet (like Therese of Lisieux and Thomas More) aren't there.
But I DO love that whomever laid out the propers was a genius. Other than the preface two places, at most to mark. I read the '62 model first before Mass to make sure I "get it." Then smile smugly during some Masses because I only have to at most turn the page over once to be able to see all the propers, while in the '62 model there've been times I had to mark 5 separate places. I get to ENJOY the Mass, rather than shuffle pages. [I can hear those around me, mentally screaming "if you're going to lay out the propers like this the Secret can REMAIN a Secret...."]
I like to think, too, about the original owner. He's signed his name in beautiful copperplate. on the page before the title page: "James Houlihan Jan 12th, 1926." 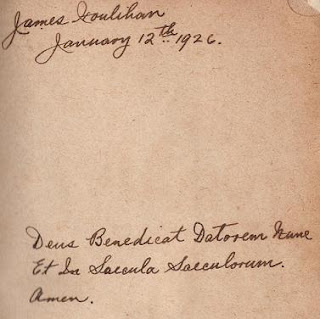 And beneath it, he added this "Deus Benedicat Datorem Nunc et In Saecula Saculorem, Amen." ["God bless the donor, now and forever, amen"] I usually say a little prayer for him and his unnamed "donor." They're both (along with the priest who offered this missal to me!) MY "donors." I bet James is glad someone is using his missal rather than have it consigned to a garbage dump somewhere!
But one makes the old "new." The ribbons gave up the ghost long ago. So I use my own holy cards. 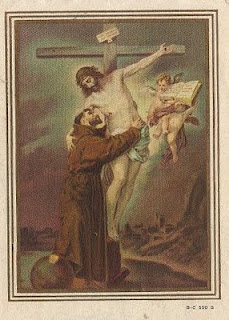 I use my "St. Francis" one given to me Aug 4th, 1963. It was my mother's 33rd birthday, coincidently, and the summer before I started second grade. Our new church, St. Francis of Assisi in Allentown, Pa. was dedicated. I was just short of 7. JFK was still president, to put that in perspective. And the Mass was still in Latin all the time. So this last year I have been learning the Latin Mass in much greater understanding than I had when I was young. [And couldn't see JACKSQUAT, I might add.]
I can remember that our first grade classroom was right next to the new church, and we kids had an EXCELLENT view of when the men were working on the roof. We had a wise nun who knew her 6 year olds. When the men were out there, once a day she gave us 10 minutes "watching" time. I can remember her having to stiffle a laugh, when earlier that year the parish had little forms in the pew of the school chapel (which we used before the new church was built) with checkoff boxes for people to help with various trades/abilities. One kid said "my dad was sore because after he marked off that he would help with "X" hours he didn't want to do as many but he was stuck because the pencils had no erasers." :-D I'm sure he "offered it up." 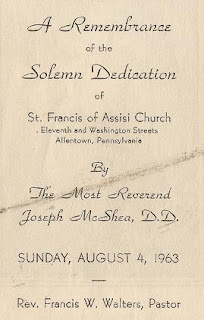 I don't know if "new" churches even think to do up holy cards, but I've kept this one all these years. I figured it would go well with this book! Something of mine with something eternal!

I sometimes wonder who will read this missal after I am gone. I do hope it won't be consigned to the fire. But perhaps it will lie fallow for a number of years, before some other, as of yet unborn hands, picks it up and discovers it anew.
Posted by gemoftheocean at 6:19 AM

A heartwarming story of that old missal.Thanks.
"The old is good" Luke 5:39

Thanks!!! And thanks for remembering my dad. I've been "saving" this post, but thought I'd post it around the end time of my melancholy time! [Between The beginning of Aug. and Beginning of Sept through the 11th -- marking the dates when my parents had died, Mom's b'day Aug 4th, her death date Aug 8, Dad's death date Sept 8, and then 9/11 was right behind it that same year he died.] Fortunately I pull out of the doldrums. I start to perk up as my birthday is on the 18th of the month. Thank goodness my melancholy days are in the summer. It would have been untenable had they happened Christmas or in particular, Easter.

Old things have such wonderful histories -- and have the fun is unearthing it.