Have Alb - Will Travel 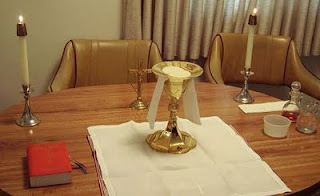 For the second Sunday in a row I attended Mass at the exclusive Chez Pere Shipley. I realzied that it was the 2nd Sunday in a row in the last 18 months that I did not stress who was going to say the Mass and if it was a certain someone how far off the "red" and the "Black" it would be.

The Sainted Father S. just says the Mass - and that's enough. He has a nice antimension beneath the corporal too.
Posted by gemoftheocean at 3:49 AM

So I'm guessing no word back from the Bishop?

You got it. Yes, they are very quick into action defending the sanctity of the Sacrament as you can see.

I would have thought it would have been MORE than just "all about the fancy pointed hat." But, in THIS diocese, alack, no. He is hiding behind his secretaries skirts.

Antimensium. Our Chaplains in the Army referred to this sacred object normally used in the Greek Rite as a "Folding Altar Stone".

:-D Great name for it. It's really beautiful, and in excellent condition as he's kept in in plastic wrap.

The only thing he doesn't know are which relics are in it. When he was at ICC I used to also lay out the "house" one. We didn't know what relics were in that, either. I used it for him because I knew that Lord only knows what they did with our altar stone after they brought in some modern square wooden block. We HAD a perfectly good wooden altar, of the long variety, but it was one the idiots at the "liturgy committee" or whatever they call themselves in the diocese foisted on us. We actually got through relatively unscathed about 15 years ago when we had to do some major structural upgrades to make ti more earthquake safe, but the original long altar was put in the church hall and the top was recovered, so God only knows what happened to it.

It's not like this diocese does good record keeping. A certain party told me that within the last year they called him wodering WHAT insurance companies the diocese would have used back in the 50s and 60s. You'd think they would have shipped off the diocesan leger books to the archives after a certain number of years, and anyone with a high school education could have figured out what insurance companies they were writing checks to, but apparently the knowlege died with bishop Buddy. PErhaps they should check the "mason jar kept on Funk and Wagnell's porch." As likely a spot as any. At this point I'm wondering if they can pour you know what out of a boot if the instructions were written on the heel.

[Dino, are you going to the picnic? I think I'll go if I can figure out the public transportation, as my car is displaying a lovely tendency to overhead right now!]

I wonder if there's a contest for the most inept diocese? I bet mine could be a strong contender. Forget the ugly chasuble contest, this is in the "nonesuch" category.