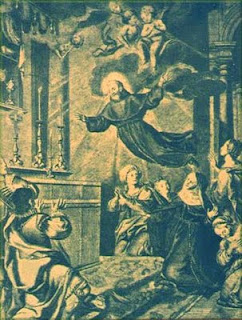 ...St. Joseph of Cupertino. One of the delights of the EF form of Mass is getting to celebrate in a formal way, all those saints that were shunted aside from the church calendar. Joseph, while saying Mass could levitate. So naturally, the powers that were wouldn't let him do a public Mass. He died in 1660, so it wasn't some "well, that was so far back is it like a St. George killing an actual dragon" thing.
Some genius decided he would be the perfect patron saint for Aviators. And I love having this unique saint be the one celebrated on my birthday.
Off to adoration and Mass shortly, where I can get some peace.

[Apologies to Peter Pan.]
Posted by gemoftheocean at 1:19 AM

He's the patron saint of getting questions you can answer in exams.

Belated Birthday Greetings to you from England! May God bless you with his graces!

Thanks all, for the kind wishes!