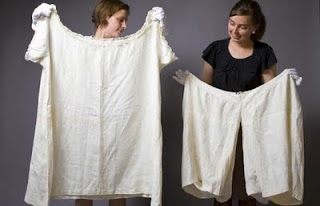 Somehow I'd missed this item in the Torygraph the other day.
My guess is she was ALWAYS "amused." She may as well have gone commando!
"Like other ladies of the late-Victorian era, the Queen wore open-crotch knickers whose separate legs were joined by a draw-string at the waist. "
Sheesh. According to the article her waist measurement was 50" and her bust 66." I think I'd have liked her. I think we can safely say she would NOT have been that woman in any all cackling female group, who ate a cookie and then announced to all her heavier "friends" "ooooooeeeee -- I feel so fat and bloated now. I'm going to have to diet now."
Vicky would have helped me stomp her to death!!!
Posted by gemoftheocean at 9:56 PM

ROFLMAO!!! That's why I like you, Gem!(as I munch on a delightfully greasy and sugared Portuguese donut (my third) bought at the parish bake sale today !!!

Hey, don't you remember? These things have NO calories if they are bought out of charity for fund raising? What you did falls under "digirule #1".

D'oh! Thanks for reminding me!!!