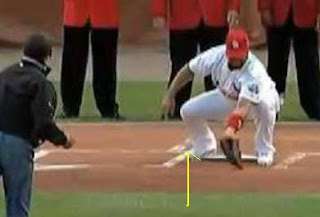 ...the lamestream lyin' sacks of excrement pressitudes are crowing that 0ero "got it over the plate." Well, you can't tell from the FOX video, God knows -- because the crazy angle (one NEVER employed before to show such a thing doesn't show it -- HOWEVER, if you go to the http://www.mlb.com/ site, they do show it. Look at the vid that comes up with 0ero's face and hit play. They'll show you the Fox broadcast angle first, and at the END of the clip they will show the pitch from a center field camera. If you freeze the frame, you can clearly see Puhols has his OWN butt over the plate, and his feet are clearly in front of the plate. And I was able to "freeze frame" the shot. The ball is just over Puhols right foot in the picture a little above shoetop range. Anyone who's played knows that ball would have been in the dirt if Puhols hadn't have scooped underneath it. That's why they used a first baseman to get that -- they knew that zero was going to have trouble, so they used a guy used to scooping balls off the dirt.

Is it a big deal zero can't throw the ball 60 feet 6 inches? In the larger scheme of things, no. In the bigger scheme of things it just goes to show what lying sacks of crap the press are to cover for his every shortcoming. If they'll go to this extent to cover up his butt over something so minor, he has a real glass jaw, they know it, but they are SLAVES to him. If they lie about what can easily be seen to be a lie (allegedly he didn't bow to a Saudi potentate either, something CLEARLY on video from a spanish language broadcast) what else does he do in the dark that they will be more willing to baldface lie about?
Posted by gemoftheocean at 8:20 PM

Labels: Last one picked for any team sport., Zero