Just when you think the US has won the coveted "All world Stupid" championship...

... a formidable Challenger to usurp Al Gore's throne has shown up: 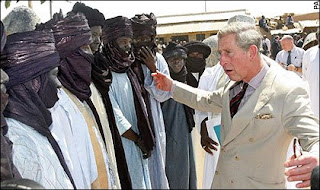 Charlie explains to his native bearers about really big whang doodle carbon footprints and how we all have 96 months to save the friggin' planet. Anyone have the patience to find out if he's in on the same scheme selling carbon credits on the side with Al?
He's like Michael Jackson. Cute kid when younger, then just talked to one too many chimps or in his case, plants.
LONGGGGGG May the Queen Reign. If you had an heir like him, would you retire? She wouldn't be caught dead saying something that stupid.
Posted by gemoftheocean at 12:45 AM

I sooo love it that *we* are supposed to stop living so that the world can be "saved". I'll be nice and stop with that.

I'd have a bit more sympathy with Prince Charles for his stance on the environment if he gave up the limo and the private plane and all the rest of it and bought a Prius or a low-emission clean diesel. As it is, it looks like he's saying that the rest of us should save the world, but he's somehow exempt. His personal carbon footprint is larger than nearly anybody else's.

(And yes, I know that there have been news reports that he drives a Prius. That's not what he shows up to an official engagement in. His official travel tends to involve vehicles whose green credentials are considerably less impressive.)

Stephen, I know. It's like Joe Kennedy II. God forbid there be "wind mill farms" which spoil his lovely views of the Cape Cod manses the Kennedys own, and we know he all flies around to speaking engagements in his private lear jet, enjoining the "peasants" [i.e. anyone not a Kennedy or silimar ilk] that we are supposed to stop breathing so the freakin' snail darter or the slug du jour can live life to the fullest.

Someone needs to point out to these nitwits that though government is right to regulate such things as not pouring toxins into the environment...but not to come up with downright impossible "goals" as mandates when the science can't support it.

Those warming and cooling trends millions and billions of years ago. .. what? The dinosaurs were tooling around in their SUVs having too many baby dinosaurs? Gimme a break, Al & Charlie. You losers know next to nothing of science.

And Stephen. I well remember how put out Charlie was when Diana parked her rump on the hood of his beloved Aston Martin. He deserved that.

"Conservationism" certainly has its place, but humankind should have to sacrifice itself on the altar of junk science.

To do my part for the environment I'm going to increase my Carbon Footprint by 100 times :)

The Blair Foundation Minister Nick Raynesford has called the situation "feudal" and the President of the RIBA has backed him up.Lord Roger's has called for a Public Inquiry.

In my professional opinion this a mega 'snouts in the trough' reaction to some genuine "A Deo et Rege" competition.

After David Diamond the Guardian of Walsingham died, all of the original planning proposals for Deptford's Power Station and Creekside fell into the hands of the New Labour 'Blair Foundation' group aka Greenwich & Lewisham Councils and their approved consultants.

The Civic Trust report for Deptford is a good starting point for any inquiry into the 'feudal' power of HRH The Prince Wales following Lord Richard Rogers call for just such an inquiry. This Civic Trust report would reveal the full extent of the contracts stolen from poor Deptford's A Deo et Rege development team.

The hermeneutic of continuity recently published an update of my FARE 2008/9 professional work which has now reached a critical legal juncture here in London : vesper has left a new comment on the post "Mass at St Peter's".

St Thomas More true prisoner of conscience pray for us!

I recently saw an article that said Charlie is THE anti-christ...and it was serious! Had all this numerology to support it, etc.

At least one of his minions I would wager :)

Swiss, no Carolus, princeps isn't the anti-Christ, nor is his mum the drug queenpin some try and make her out to be - but it probably sells a lot of "The Globe" rags off the supermarket shelves. The run those stories when they run out of "Space aliens ate my newborn twins" ones.