Is TOTALLY stoked her 4th weekend has started 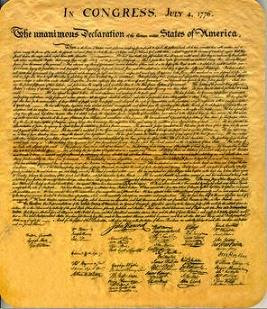 The "suits" [technically our two bosses, wearing flip flops and t-shirts, but still "suits"] took us out to lunch today and picked up the bill in honor of the upcoming 4th of July weekend. We also got off work 1.5 hours early AND they paid us a day early, and we get tomorrow off. HOO-RAY!!!!

I'm also, so far, feeling well and fine, and it looks like it's going to be nice weather all weekend. [LAST two 3 day weekends I was unwell, and the weather was crappy.]
If you want to get REALLY technical about it, the Declaration was voted on and passed on the 2nd. And this was the Day John Adams thought would be celebrated. They niggled over some of the language and it was formally adopted on the 4th.
King George remained "a tyrrant." They had to offend somebody.
(And yes, Stephen, I added those last two sentences for you!)
Posted by gemoftheocean at 1:51 AM

Have a great weekend! You deserve it.

Hope you have a good weekend, and that you enjoy Independence Day while you can! Remember that in USA unborn babies had the possibility of freedom and independence one day but that is now denied to many through a judgment of your Supreme Court. Independence Day is now only Independence for some. Who is the real tyrant now. Both our nations have a sperabundance of tyrants. When will thery come for you and for me?

Agree re: the unborn. It's what comes of having people sitting on the bench who "make up law" as they go rather than rule on the law as it is. IT's a battle of hearts and minds now.

BTW, I think you misread the comic statement re: the king being a tyrant. In the musical, 1776, there is a section when the delgates are going over the draft of the declaration. The colloquey went as follows:

Mr Dickenson [who was not in favor of breaking from England]: Mr Jefferson, I have very little use for your paper, and there is very little doubt in my mind we will have heard the last of it. But I am curious about one thing: why do you refer to the king as a tyrant?

Mr. Jefferson: Because he is a tyrant.

Mr. Dickenson: I remind you, Mr. Jefferson, that this "tyrant," is still your king.

Mr. Jefferson: When A king becomes a tyrant he thereby breaks the contract binding his subject to him.

Mr. Dickenson: How so?

Mr. Jefferson: By taking away their rights.

Mr. Dickenson: Rights that came from him in the first place.

Mr. Jefferson: All except one, the right to be free comes from nature.

Mr. Dickenson: Mr Wilson, do we in Pennsylvania consider King George a tyrant?

Mr. Dickenson: There you are, Mr. Jefferson, your declaration does not speak for us all. I demand the word tyrant be removed.

Thomas Jefferson: Just a moment,
Mr. Thomson. I do not consent. The king is a tyrant whether we say so or not. We might as well say so.

Charles Thomson[recording secretary]: But I already scratched it out.

Thomas Jefferson: Then scratch it back in!

John Hancock: Put it back, Mr. Thomson. The King will remain a tyrant.

As for coming for thee and me: They'll be able to get "thee" a lot sooner than me. I am armed. I'd like to see the Obama Jungen try it. They just might "Make my day."

Bui for the record: Taxation WITH representation is lousy too.

Thanks for reply. No I understood your reference to Tyrant KingI. was referring to modern Tyrants like Obamaover ther and Brown and his cabinet over here!
Of corse yes, you are armed. But will that protect you? I am not allowed carry arms but am wearing armour plated underwear...a bit heavy!....but I am probably better protected that you. :-)

A very happy holiday to all in U S of A

If I'm faster on the draw it will protect me -- at the very least, I intend to "take some of those basserds" with me!! It will give the next batch of thugs pause. Think of what would have happened in Nazi Germany if the first group of Hitler henchmen had shown up to pistol whip Jews if they had been met with armed resistance. This "pro" 2nd amendment thing cuts across all political lines over here. Vermont which is quite liberal has a high percentage of gun owners and the least amount of crime. I was sitting in a cafe just yesterday and some ageing long haired hippy type and his family were at the table, and suddenly the guy mentioned to his dad re: him trying out a [particular] pistol on the range.

It's kind of a Clint Eastwood thing
along the 'Go ahead, make my day' thing.

Don't worry about the spelling mistakes. Do it all the time. You especially catch them just after hitting "submit."

LOL. You are a wickedly violent woman...but I like you

I was just asking my husband what happened to the militias that were supposedly congregating all over the country awhile back. Some friends have started a "Conservative Ladies Book Group," maybe we need a Conservative Ladies who Lunch with Lugers Group :)

That combined with "Lunch with the J. Boys" [I.e. Johnny Walker, Jim Beam, and Jack Daniels] should make for quite a few Miss Otis Regrets... ♫days!