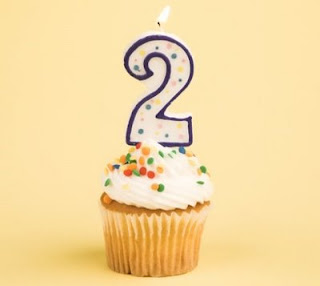 Hey, it's my blog's 2nd Birthday! My how time flies by. I'm surprised I've been able to keep this blog up as long as I have. When I was a youngster and in my teens, I'd occasionally try and keep a diary. I think the longest I went was for about 6 months when I was 15 (and that makes for a kind of a fun read) -- but I have to say I find blogging more satisfying. No writer's cramp and I can easily add in pictures/links/etc. Oh. And I get an audience to boot!

As to WHY I called it "Gem of the Ocean" -- I had initially for a week or two started a blog on the Daily Telegraph -- and then realized that if the DT got pissy, they could just yank anyone blah, blah or decide not to have free blogs, whatever. And I wanted to go with a more likely-to-be-stable platform. As I had been reading a lot of Catholic blogs, since the majority were on blogspot, I went with that. I'd gone with "Gem of the Ocean" because, the patriotic moniker "Hail Columbia" was already taken in so many ways ... ("Columbia" is a patriotic tune I've always enjoyed.) So I went with the 2nd line, which is "Gem of the Ocean" and I thought it apt, living in San Diego by the ocean. 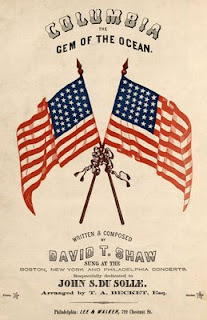 I noticed a interesting entry, on the Gutenberg project the other day. The book was "The Good Old Songs we Used to Sing '[18]61-'[18]65." (1902).
They had a nice illustration of the sheet music to the song "Columbia" and some good links to the sheet music. I like this rendition by the Mormon Tabernacle Choir.
Posted by gemoftheocean at 12:23 AM

Happy Blogday to you!

I thought you had been on blogger longer than me. I am coming up to my 3rd anniversary soon.

Congrats - you bring joy to our lives

- I don't even know when mine is. I started my blog and didn't post for FOUR MONTHS because I wasn't sure how to do it. heh!

Congratulations, and many thanks for all the laughs! I was told as a child, that ifI could not laugh at my religion I would never be able to take it seriously!

Happy anniversary Karen! You sure it's only 2 years? Any idea how long I have been coz I deleted my earlier?

BTW, this reminds me *our* birthday is coming up soon!!!

Here's to the terrible twos.

Happy anniversary. And many more!