My cousin and her husband are still visiting so we took the opportunity to do a Harbor Cruise (like I did last year) and went on the Aircraft Carrier Midway.

Panoramic View from the USS Midway:

We lucked out, although they have a nice brochure and headset and guided tour, it doesn't have the immediacy of talking to someone actually serving on such a ship. But when we were down in the engine room, by chance also was a visiting enlisted man who is serving on another carrier who works in the engine room, who was touring his own family and friends around. He said on his detail there's 12 guys, and you work your way up by learning each position -- starting with the poor schlep who has to note all the reading on the gages and communicate them to the "powers that be" upstairs. The engine room is hotter than hades as it is under normal ops but in the Gulf it can get to well over 100 degrees down there.

Here's a picture of a little bit of the engine room. 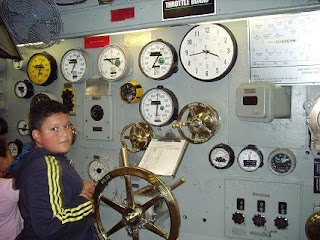 This youngster here isn't all that much younger than the average crew member. The average serving crew member on a carrier is aged 19. Car insurance companies seldom rent cars to someone that young, but the US Government trains them and trusts them to do all manner of things on a carrier including being an integral part of launching and recovering fighters off the decks of carriers. The enlisted man says that on average it takes about 7 months or so for the average fellow in the engine room to be comfortable with being able to man any of the 12 positions down there on his crew.

About half the crew on a carrier "Runs the ship" and about half are involved with carrier ops. Those handling aircraft topside all wear color coded jersies. The one is "yellow" on the flight deck plays BOSS. Everyone on deck goes on his/her command. Those in red handle ordinance, etc. "KISS" -- "Keep it simple, stupid."

I did see one potential problem. It seems to me the berths in the brig are more commodious and less claustrophobic than the ones for the enlisted men! In "real life" they do have sheets! And the enlisted men's buncks have little curtains. The little "shelf" under each bunks is the small bit of room the crewman has to store his gear. There is a bit of locker space for such larger items like pea-coats, but it's hard to be a "pack rat" on a ship. BTW, the JUNIOR officers have only two bunks for each "rack" and a few extra inches of mattress! I didn't bother going up to "officer's country" but by comparision IIRC they live in the lap of luxury, with probably a chair and a little table! I expect the captain has a jacuzzi. :-D No wet bar though. Thanks, Josephus Daniels, you tee-totaling, racist, newspaper hack, friend of Woodrow "delusional" Wilson, and spoil sport extraordinaire! So no rum ration. Offically, anyway. 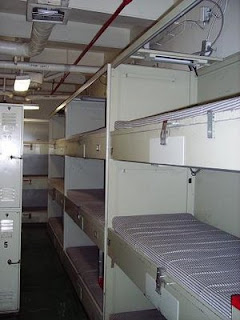 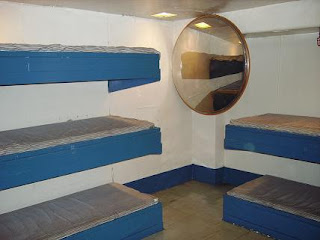 There's a lot of different type of aircraft to see on board. Here is an "Avenger" the type George H.W. Bush flew towards the end of WWII. 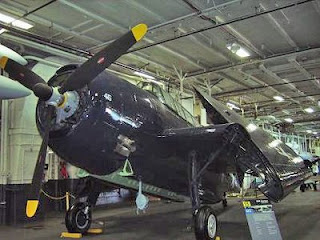 Afterwards we were famished and ate at Anthony's -- generous portions at reasonable prices. We opted to eat outside, quicker and cheaper. We baby sat a really friendly fellow, Jake, while "mom" ordered and picked up. His "mom" informed us that Jake LOVED to find dropped French fries. He'd found one from me, and I was his bestest friend for that particular half minute. 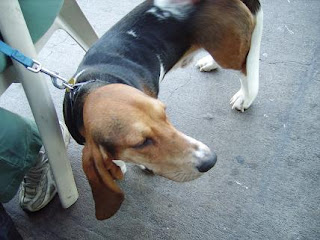 Along the harbor are a number of statuary. Nothing too tripy, more whimsical, the kind I usually like. I like this squid: 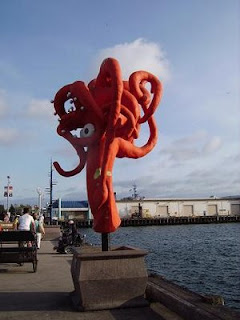 On the other side of the Midway, the powers that be "went big." 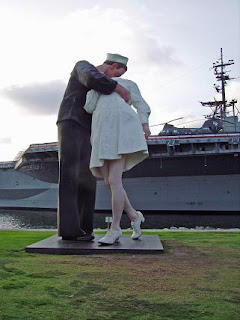 History buffs will note the inspiration was from a famous Life Magazine photo. [The statue guy is a little less of a wolf than the real life guy. Given the "real life" guy had his hand on her butt! So he was cleaned up a bit for public consumption.)

Later on we did something really novel. We went out to Sunset Cliffs to watch...the sunset. 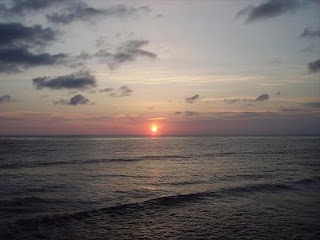 Posted by gemoftheocean at 5:05 PM

great pictures Karen. Looks like a fun day out.

I would have loved to have heard your voice on the film!

But I think somewhere I have an audio I can lift of me doing one of the readings at Mass. I probably might not have a chance to post that tonight (I'm going to Mass in a mo. but just for you, I'll see if I can rustle it up to archive.org and link it for you. I think I was doing a voice recording of one of the "Sainted one's" Masses the year before he left (Because it occurred to me that "The days grow short, when you reach September" and if I didn't make a few recordings then, I'd never get any.)

Karen, that last picture is stunning!

I toured another aircraft carrier... the USS Carl Vincent in Bremerton a few years back. They are impressive. What a fun thing to do with the visiting family and friends!

Kelly, how cool! The CV - is one of our newest carriers. I'd love to tour an Carrier that is currently active. there's a WWII vintage sub I've toured in Hawaii too! Talk about claustrophobic. the sleeping quarters on the carriers are spacious., The sub crews get the best food, however. Not surprising.