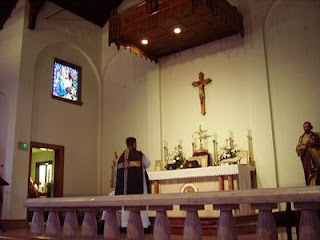 Fr. G. likes to have fun. Really. He takes full advantage of doing a votive Mass when there would otherwise be a plain old feria latin mass with "nothing doing." I was pleased yesterday morning when he'd chosen to do a memorial requiem Mass "just because." I knew something was up when I walked into church and saw the purple veil over the tabernacle. The sacristan was already in the pews, so I went over and asked "what's it going to be today" and he said "requiem memorial."
So I marked out "Mass for the dead" Basically the Mass said on Nov. 2nd for All Souls - with exception -- depending the "class of people" you're to remember. Well, we were okay, sorta. After Mass we compared notes and Fr. G. must have pulled some Gallician "only said twice EVER" Mass propers out for the Collect, Secret, and Post Communion. Everyone, including the sacristan thought "huh?" The collect started with "cumque" ["and with..."] -- none of us had that particular class of people in our Missals. Fr. G. "got us."
S'okay, score is one to one. The other week he didn't catch that he'd started to do the Mass he did on the Monday AGAIN on Tuesday. He caught himself after the first para. of the Gospel. He abruptly stopped. You could see the gears turn. "Hey, I THOUGHT I'd done this." So he flipped a few pages and started the right gospel. It pays to pay attention and follow the Latin...those who don't wouldn't have had the giggle. Didn't turn a hair, good man!
Mass today was easily the first Mass of that type I'd been to since Nov. 2, 1963!!! [Assuming mom and I went to Mass on that particular Saturday.] It was really neat to hear the Dies Irae said in the right context of the Mass. I've been enjoying the last few months, having been gradual exposed to every type of Mass. I'm collecting the whole set, bit by bit.
[On reflection I think there must be a "memorial Mass" somewhere for bank accounts - who knew?]
Posted by gemoftheocean at 8:47 PM