I think this one stands close to the zenith of Muslim Stupidity. This from the Daily Mail:

"Angry parents hounded a woman out of her job at a Muslim girls school because they believed she was a man.

Shifa Patel, a 28-year-old secretary, was accused of hiding her masculinity beneath a traditional headscarf and robes.

The hate campaign started when photographs of a short-haired Miss Patel wearing a shirt and trousers were spotted on Facebook. They were copied and emailed to dozens of concerned parents as 'proof' that Miss Patel was a man."

And there was also this: "In a bid to defuse the rumours, she underwent a humiliating medical examination to prove that she was in fact a woman. But parents refused to believe the results and the headteacher resorted to writing to all parents assuring them the secretary wasn't a man. Miss Patel was finally forced to quit after a mob of parents gathered at the Al-Islah Muslim Girls School in Blackburn and demanded governors sack her immediately.

Police were called to the school last Monday and had to disperse the more than a dozen parents at the gates."

Idiot government ministers who let these head hacker sympathizers in the country in the first place could not be reached for comment.

When is the west going to learn that these people, on a certain level just do not "assimilate well" to western culture. As Gen. George S. Patton said "They didn't know what a latrine was, until I showed them!" 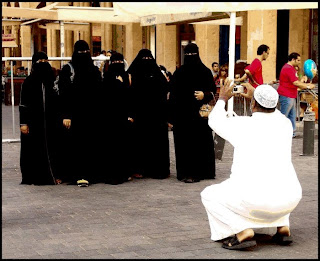 The Muslim family en vacance. Which wife wags the willy?
Posted by gemoftheocean at 4:48 AM

Labels: The religion of pieces

Maybe another pair of .44 knockers (1 worn on each hip) would have changed public opinion (or at least would have suppressed the trouble makers)