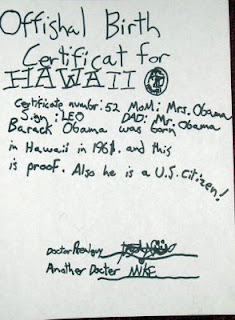 Once again, I'd like to thank the 68+ million American Assholes who voted for this usurper. I loathe you people more than I loathe him, if possible.

Barry Soetero, who declared the US "not a Christian Nation" has claimed that the US is now the biggest Muslim Nation. I hope the Egyptians, or wherever he's going to be doing his next round of "apology tour" realize he is an apostate. How many Muslim princelings will he kow-tow to this time around?
Posted by gemoftheocean at 6:26 PM

LOL! I love the Birth Certificate.

:-D I do too! Scary part is some of the people who voted for 'bama would find that "irrefutable evidence."