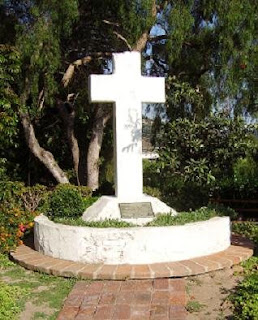 Not too many martyrs in California, but he was martyred at San Diego Mission de Alcala. This cross about marks the spot where he died. He was killed by Indians.

There is a sign regards his martyrdom which reads:

"Born Melchior Jayme on October 18, 1740 in the farming village of San Juan, Majorca, Spain. In 1760 he was received into the Franciscan Order and chose "Luis" as his religious name. Padre Jayme became pastor of the Mission San Diego in 1771 and was instrumental in moving the Mission inland from the Presidio to the present site in August of 1774. By December of that year, a number of adobe and thatch buildings were constructed. Crops were planted and many natives joined the Christian life and were baptized.

Progress was being made until the early hours of Novemeber 5, 1775 when hundreds of natives from surrounding rancheras set fire to Mission buildings, pillaged the church, and cruely murdered Fr. Jayme as he met them with his usual greeting 'Amar a Dios hijos - Love God, my children.'

Fr. Jayme became the first California martyr, because of his self-sacrifice, devotion, faith, and love. His remains are buried in the sanctuary of the church at Mission San Diego de Alcala."

Below is a picture of the Mission, the first in a chain of over 20 all up and down the California coast. 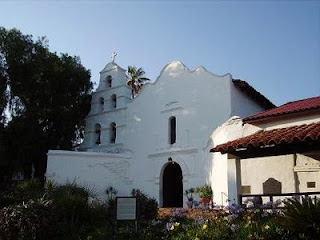 Surprised I hadn't posted about this earlier. I've lived so close to it for so long, I tend to take it for granted. I met a friend for Mass there last night, and thought it might be something my readers would enjoy.

BTW, Abe Lincoln, was a friend of the Missions. The Mexicans had confiscated them in the early 1800s, I believe, and they were allowed to go to ruin, and used as storehouses and all such things by the anticlerical Mexican government. Later on when this land, after it became part of the US, was given back to the church by Abraham Lincoln. [Abe gave back all the mission lands. I know up in San Juan Capistrano, there's a nice plaque mentioning his role.]
Posted by gemoftheocean at 3:57 PM