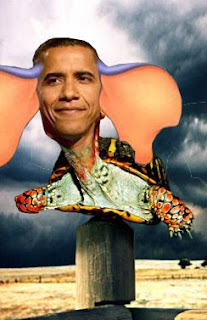 Someone sent me this one, and it pretty much sums up the way I feel about Nobama:

"While stitching a cut on the hand of a 75 year old Texas rancher, whose hand was caught in a gate while working cattle, the doctor struck up a conversation with the old man. Eventually the topic got around to Obama and his bid to be our President.

The old rancher saw a puzzled look on the doctor's face, so he continued to explain. "You know he didn't get up there by himself, he doesn't belong up there, he doesn't know what to do while he is up there, and you just wonder what kind of a dumb ass
put him up there!
Posted by gemoftheocean at 11:29 PM

Personally, I think it should be a law that on EVERY political television ad, the candidate should have to have a website across the bottom of the screen. On the website should be listed ALL major campaign donors. Starting from top $ given on down. I want to know who funds a candidate. It wouldn't surprise me any to see George Soros at the top of Nobama's list.

Hubby has a friend who is Russian. He told my husband that the name George Soros is akin to a swear word in Russia.

Did you see the SNL skit with Soros in it? They had all the Dems, especially Pelosi, paying homage to Soros, saying he was the most powerful man in the Dem party. Why couldn't we have gotten him and Alec Baldwin (and Streisand, Clooney, DiCaprio, etc) to go to Canada 8 years ago. Not that I wish them on Canada, but NIMBY rules seem to apply here.