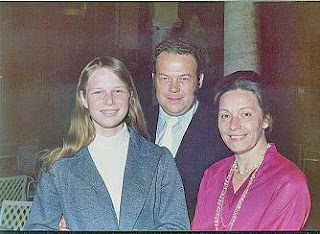 Today is the 7th anni-
versary of my father's death. He'd died just before 9/11 and I was glad he didn't have to see that.

I think it's a bit poignant that we often don't understand our parents, dads in particular I think, until we are much older. When we're young, we see them come home from work, tired, tight lipped, often times not much communication beyond: "Hey, honey, get me a beer out of the fridge."

We don't really understand until we grow up and go to work ourselves and have to deal with "the boss" who essentially controls our being able to pay the bills and put food on the table. You understand now why "the old man" didn't want to bring any problems from work in the house. He sucked it up. He worked long hours. Kept a roof over your head, kept you warm, and fed, and gave you pocket money. You never had to worry about paying the electric bill or your tuition bill. He did. And he never pointed it out to you. Not once. [Well, other than your parents yelling at you "TURN OFF THAT LIGHT WE DO NOT OWN STOCK IN THE PP&L!!!" - Pennsylvania Power and Light, to the uninitiated. It was always them that we didn't own stock in, even well after having taken up residence in Virginia, New Hampshire, and California.]

Dad came from coal miner / farmer stock from the hard coal country of Pennsylvania. I got my sense of humor, patriotism, love of sports, any sales ability, and competitive spirit from him. I was totally out to lunch receiving the "quick mental math" gene both parents had - though I did make it through freshman calculus - thanks be to "the god of partial credit."

My dad was a convert to the faith, and I have to say he was more of an Easter/Christmas Catholic - especially as I got older. However, he was still a man of basic integrity. When I was about nine once, we'd eaten in a restaurant somewhere in North Carolina on our way back from a vacation. For some reason I'd lingered at the table that time, and had noticed 2 bucks left on the table. I had not known about tipping yet. I just thought dad had accidentally left change behind. Well, I picked it up, meaning to give it to him. I got distracted, but about 10 miles down the road said: "Hey, dad, you forgot your change." Well, in the mid 60s, two bucks was a decent tip at a roadside diner. Dad was very nice about it and didn't yell at me, but explained about tipping. We drove back and he made sure the waitress got her tip. "Never stiff the working man / woman." His gesture was all the more impressive, because I knew we'd be unlikely to stop there again.

My dad did have a wicked sense of humor. One Sunday, my mother had out done herself laying on a first class dinner after she'd knocked herself out in the kitchen all day. His favorite pot roast with all the trimmings, the best china, the whole nine yards. After he was called to dinner, he grudgingly tore himself from the football game he was watching and plopped himself down at the dinner table, wearing a seen-way-better-days undershirt. Mom took one look and yelled at him "ED, JUST ONCE COULD YOU MAKE AN EFFORT TO DRESS NICE FOR SUNDAY DINNER?!" Wordless, chasened, he got up and went to change to make my mother happy. He came back and sat down - wordless. He'd put on his best silk tie ... and was still sporting the ratty undershirt. You wanted to kill him, but you were laughing too hard.

This picture was taken in Rome in the spring of 1974. My dad did a lot of travel for his job, and sometimes he was rewarded with getting to take us on trips for fun too. This was our first time to Europe.

Posted by gemoftheocean at 1:54 AM

I will say a prayer for your dad's repose Karen. BTW, I can see where you get your humor. Very funny.

"TURN OFF THAT LIGHT WE DO NOT OWN STOCK IN THE PP&L!!!" ...That is what my mom always told us. Except she substituted PSE & G. (Public Service Electric and Gas).

Esther -- I'm wondering if that was out of the "Parents from the east coast" playbook!!! Never the water bill etc....always with the gas and electric company. I wonder what parents who DID own stock in the PP&L say. Had I been a real smart ass I would have bought them a share when I got older. Probably just as well I didn't!

Con Edison was the company we didn't own stock in when we'd forget to turn off a light.

Your father sounds like a delight, Karen! His treasure lies in the fact that his daughter sees fit to honor him. That's how a prent knows they did a damn, fine job!

Your Dad was very cute - just like his daughter. And your Mother is gorgeous. God Bless them both.

Digital Hairshirt has put it beautifully. Your father could have no memorial finer than his proud and loving daughter. May he rest in peace. Prayers for you, too.

(I seem to remember from an earlier post that you were in the air (returning or going to his funeral?) at the time of 9/11, too?)

Phil - I was in the air 9/10 - lucky thing too had I traveled on 9/11 itself I would have never made it on the plane, them being grounded before I left west coast time - I would have never made the funeral. I remember how eerie it waws going back the 1at day planes were allowed to fly again - the airport was empty the night before with juswt a few counter people when I went to pick up my ticket. Day of travel was eerie too, with a few brave? souls venturing out.

It amazes me that passengers didn't kill Richard Reeves, the shoe bomber when he tried that stunt.

Praying for the repose of your father's soul. I thought this a lovely tribute to a Dad you loved so very much.

What a lovely guy! God rest his soul.