The gift that keeps on giving.... 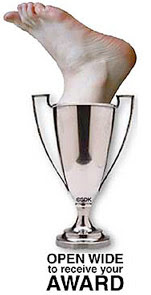 SC Democratic Chair: Palin’s Chief Qualification is She ‘Hasn’t Had an Abortion’

"South Carolina Democratic chairwoman Carol Fowler reportedly lashed out at Sarah Palin Wednesday, saying the Republican vice presidential candidate’s “primary qualification seems to be that she hasn’t had an abortion.”

Politico.com reports that Fowler, wife of former Democratic National Committee Chairman Don Fowler, said that John McCain’s decision to choose an abortion rights opponent would not boost his candidacy among many women."

Can't wait for Nobama to defend the "lipstick on the pig" thing some more either. Yes, yes, the phrase has probably been used since George Washington's day .. but given Nobama's covert Muslim background, it's surprising he even says the word "pig." Not even the self-referential "pig in a poke." Nice try, Nobama. We'd have given you a pass IF you had used the phrase on the campaign trail BEFORE Palin was on the ticket. Back to the drawing board, skippy.

Posted by gemoftheocean at 7:14 AM

I've read a few of your posts about Barack Obama, or as you call him, "Nobama". I was wondering if it was because he is black that you assume he is a Muslim, or that it is because his middle name is "Hussein"? As a Catholic like yourself, I find it quite amazing that although you know and follow the Bible, you would bring something so petty that SHOULD be overlooked into the debate.
Love thy neighbour. But only if they're white and believes exactly what you do.