..I think I'll just be done with it and go for the Red Neck B'day cake. 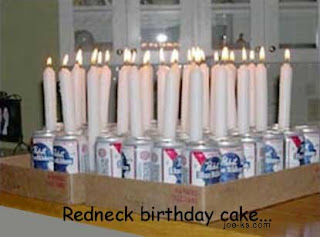 Okay, I'm older than Fathers Tim, Sean, John, Owl and Erik, and younger than Springtime. On the other hand, I'm only 34 in hex. That's geek speak. This is when geek speak is good. Fathers Tim, Sean, John and Erik are geek enough themselves to be able to 'splain to Fr. Blake* and the rest of you non-geeks. (Ha-ha, Mac and AA and Monica are geeks too, but I won't blow your covers. AA hid his plastic pocket protector, Mac is affecting the ditzy blonde thang and doing it to perfection, and Monica has a hard time concealing that slide ruler, but sometimes she gets away with it)

I just hope I don't have "issues" with the fire department later today. 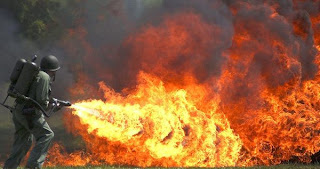 *Though come to think of it, Fr. Blake might be the biggest covert geek of all - given the level of desperation he had last year when he couldn't connect to the internet, but still managed to figure out he COULD connect *if* he was willing to put his laptop on the upstairs sink if he really, really had to. Maybe he's just cooler than the rest of us.

Posted by gemoftheocean at 9:01 AM

Have a very happy birthday, Karen! I'm praying for special blessings for you today!

Love the photo! Enjoy the PBR! It looks like you have enough there to extinguish the fire.

Happy Birthday Karen. Love the cake. I wonder what my children would say if I asked them for a redneck birthday cake.

Happy B-day Karen! (I never had the pocket protector - as some of my shirts will testify - but it was my circular slide rule which gave me away...)

Happy Birthday Karen - the cake looks fabulous, hope it's real and not just a tempting pic.

Happy Birthday Karen! The best part of that cake is all the fun you get to have making it [deep man-belch].

You should invoke birthday privilege and latch on to the Digi-Fr.E-Fr.JM In-N-Out train to the north this weekend!

Happy birthday karen... and just to prove my geekery, please note that I'm posting my comment from my snazzy mobile phone... after having "written" it on my phone using handwriting recognition... glad to hear I'm a convincing ditsy blonde!!

Happy Birthday Karen!!! Don't eat too much of that B-day cake all in on sitting--LOL. I'm shutting off the computer and going to go pray a Rosary for your intentions--now--Have a great day, and may our Lord bless, bless, bless you!

Happy Birthday dear Karen!!!
I don't understand Geek talk so I'll ask my husband to translate :-)
Have a wonderful and blessed day.

Happy Birthday to you!!
And many more...
Hope you had a good one.

BTW: I'm too young to have ever used a slide rule and don't really know how, HOWEVER I do have a collection of them, some of which are kinda valuable. So guess that makes me geeky by proxy :)

And, the homeschool method I'm teaching my son uses an abacus. I think it's a great way to learn conceptually but it is so alien to this "new math" gal. Now that I've been doing this curriculum (for all of two weeks) I really like it even though I have to mentally shift gears to get into the zone with this way of thinking. I almost feel a rant coming on about how my generation was screwed by what we didn't learn in school AND not being catechised well, but it's your birthday and I'll just stop and wish you all the best.

Many blessings for another year!

(And plan on seeing you on November 1st, yes?)

Mike, I think you should go take Karen out for her birthday . . .

So sorry to be offerig belated birthday greetings, i wasn't well yesterday and didn't spend long online or even check out my bloglines....I pray for you every blessing and that you may be blessed with many years to enjoy them.

Thanks for all the birthday wishes.

[And yes, digi, it's on my social calendar, unless gas jumps to 80 bucks a gallon or something. So we should be okay and good to go!]

Happy Birthday to my favorite Californian....

Sorry I missed it, Karen. I hope you had a good day. Many happy returns!

happy belated b-day ;) sorry i'm late, i'll make up for it with 34 rosaries