Mind you, this took a few weeks of marking Nobama ads as "obscene" - 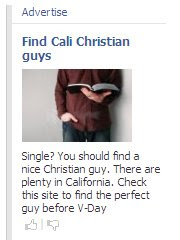 ...ditto rejecting "find the perfect stud muffin" ads. These are supposed to be guys you can take home to mother. Ha-ha. The cleverest of sleazy guys would probably sign up for this one.

A while back there was an article that said the pope's parents met through a lonely heart's club ad. His dad posted what was almost literally: "Wanted: hausfrau who can cook, clean, mend my socks and has own money." Apparently, in spite of all he'd written she WAS very smitten. ♫ (hi Stephen!) I think it's miraculous the pope was ever born! [Although he had to place the ad a few times. Even given the relative lack of men around after WWI I'm stunned anyone replied.]
Posted by gemoftheocean at 4:54 AM

I believe in love and i believe it can be fascilitated into fruition by any means if two people are intended by God, to be together.

I love how bold Papa's father was at the time, to 'advertise' for a woman....i'm not too keen on the precise style of his writing in that advertisement (LOL) but he knew what he wanted and he 'went for it'.

Too many men don't seem to know what they want these days and most women want men to be assertive and not wishy washy...yes, i can very much appreciate why Papa's mother was responsive to the 'adveritsement' that her 'soon to be husband' had placed.

It might not have sounded the most attractive or romantic of 'positions'...but she knew where she was with the man right from the outset. Expectations were also probably much less convuluted in those days...nowadays so many people seem to have tick-lists for potential spouses.

Speaking for myself, who needs all that crap about 'is he/she interested?' 'is this more than friendship?', 'is he/she telling me he/she likes me as more than just a friend?'

Give me a man who knows what he wants and i'll be a happy woman...especialy if he wants me.

p.s. am i missing something about you/Stephen? I am always the last to know about anything :-( sulk :-(

(The musical reference was especially for him. I've internet known Stephen for years, and have met him in real life a few times. He's a countryman of yours, and is a doctoral candidate in theatre. An all-around-great guy

One of my favourite family stories -

I've recently, somewhat reluctantly, been lured onto Facebook. It's my cousin's fault - she prodded me into signing up for a profile as a means of keeping in touch after she goes off to college, and then, before she actually went a few days ago, prodded me again into actually looking at it. Like I need *another* internet addiction.

(And no, people who do not know me, internet addiction #1 isn't anything I couldn't tell Mother about. Wash out your minds.)

Oh yes - and I saw that production of "She Loves Me" on Broadway AND in London (I have the Broadway recording). I missed Judy Kuhn, though, unfortunately - I saw it after it transferred (she's not on the CD either, more's the pity).

I love SLM. ANY production. It's one of those shows I'd go to see anyone put on. I don't care if it's in someone's garage . Just go. ditto
Noises Off!

Okey dokey, just didn't want to be 'out of the loop'

p.s. sorry if i caused any embarrassment!

Just for the record, I met the Canuck via Internet personals, and I can list off a half dozen couples I know who married people they met on the Internet who seem to be excellent matches. I only know one crash-and-burn story, and I'm not even 100% sure they met on the 'net; I just know what someone he met on the 'net was the impetus for their divorce.

Don't forget that Papa's father (would that make him our Grandpapa?) also alluded to his own...inexperience. I thought that was particularly sweet, myself.

I'm not sure I'd go and see *anybody* do "Noises Off", actually - I've seen a couple of really horrible amateur productions (including one, unfortunately, that had a really good friend in the role John Ritter played in the film, so I had to stay around and say something nice afterwards). You *really* need to be on top of the timing, particularly in the second and third acts, or it all falls to pieces.

Stephen: Agree about the timing. As to what to say to your friend - try the all purpose: "The production was AMAZING." Kinda covers everything!

"That was UNBELIEVABLE. I mean it!

"You were never better!"

"Oh, you should have seen yourself!"