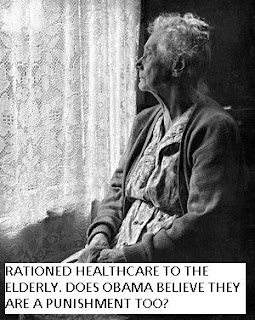 H/T to this thread on freerepublic for alerting me to this paragraph in the House Bill the Obominator wants to ram down our throats. These paragraphs are from an editorial in Investor's business daily.

"This administration, pledging to cut medical costs and for which "cost-effectiveness" is a new mantra, knows that a quarter of Medicare spending is made in a patient's final year of life. Certainly the British were aware when they nationalized their medical system.
The controlling of medical costs in countries such as Britain through rationing, and the health consequences thereof are legendary. The stories of people dying on a waiting list or being denied altogether read like a horror movie script.
The U.K.'s National Institute for Health and Clinical Excellence (NICE) basically figures out who deserves treatment by using a cost-utility analysis based on the "quality adjusted life year."
One year in perfect health gets you one point. Deductions are taken for blindness, for being in a wheelchair and so on.
The more points you have, the more your life is considered worth saving, and the likelier you are to get care.
People such as scientist Stephen Hawking wouldn't have a chance in the U.K., where the National Health Service would say the life of this brilliant man, because of his physical handicaps, is essentially worthless.
The British are praised for spending half as much per capita on medical care. How they do it is another matter. The NICE people say that Britain cannot afford to spend $20,000 to extend a life by six months. So if care will cost $1 more, you get to curl up in a corner and die.
In March, NICE ruled against the use of two drugs, Lapatinib and Sutent, that prolong the life of those with certain forms of breast and stomach cancer.
The British have succeeded in putting a price tag on human life, as we are about to.
Can't happen here, you say? "One troubling provision of the House bill," writes Betsy McCaughey in the New York Post, "compels seniors to submit to a counseling session every five years (and more often if they become sick or go into a nursing home) about alternatives for end-of-life care (House bill, Pages 425-430)." 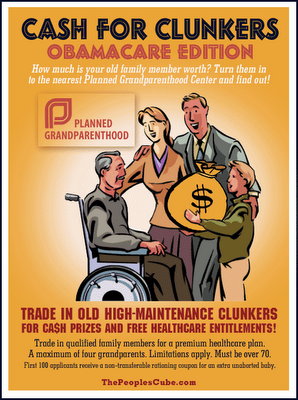 Posted by gemoftheocean at 2:04 AM

And in Britain the push for assisted suicide and euthanasia will probably pass solely on "economic" grounds financial burdens on Health service, which roughly translated means that if you are ill and old you are an unacceptable burden on socity

Just realised that by time you are eight hours behind us. Bet that is not the only matter in which you are behind! :-)

Some things it's good to be behind in. Socialized medicine, with bureaucrats making the decisions is a good one! :-D

One popular radio conservative, Rush Limbaugh, was on a roll the other day. He was picking apart the statements of these nomenklatura types and said "who the HELL do these people think they are?"

Yup, I can retire early--because as soon as I get a bit sick--President death will have the red kool-aid ready and available. Can't work--not productive--die!

That is a great photo.

Of course these congressional bastards aren't going to be on it. When quizzed princess pelosi and others have said "who? Us? You expect us to go on the same plan as you peasants? You must be joking, oh, no, you'll be on a SIMILAR plan..."

I guess this stupid witch with a captial "B" thinks we're all as stupid as the people who voted for zero. Similar to WHAT (Jane you ignorant slut!)? Cuba?

(You younger people and foreigners will have to reference "Saturday Night live" for that "Jane" parenthetical. I could 'splain, but it's much more fun to look it up yourself.)

"The U.K.'s National Institute for Health and Clinical Excellence (NICE) basically figures out who deserves treatment by using a cost-utility analysis based on the "quality adjusted life year."
One year in perfect health gets you one point. Deductions are taken for blindness, for being in a wheelchair and so on.

The more points you have, the more your life is considered worth saving, and the likelier you are to get care."

I don't know where you get your information from, but that is absolute rubbish! I wish you Americans would get your facts right before posting about our health service!

EHCP: Do you NOT ration care? Do people from 1st world countries flock to you for care? Or is there an exodus to private insurance and treatment elsewhere for care for critical issues? I'm not talking hangnails here. Does your government not decide on who gets what? [For those unfortunate not to be on a private plan.]

The Obomination wants to go to "single payer" i.e. get everyone eventually on a government plan. Taxpayers here are right to scream at their congresscritters.

In the UK private healthcare is only for minor ailments and complaints. All major illnesses such as cancer, etc tend to be treated on the National Health Service because the private health companies are only interested in making money and when people die they don't tend to make any or the cost of treatment is too prohibitive for them (the private companies not the patients). So there is no exodus other than for non-urgent operations. In these cases you will often be seen by the same doctor as if you went on the NHS. You are just paying to be seen sooner and in any case the waiting lists have been significantly reduced now. Personally I'm happy to wait a couple of months if it means I don't have to pay. The US system BTW is crazy - 50 million people with no healthcare provision is not something a civilised and wealthy society should tolerate.

"People such as scientist Stephen Hawking wouldn't have a chance in the U.K., where the National Health Service would say the life of this brilliant man, because of his physical handicaps, is essentially worthless."

Ummm...... Hawking is British. He was born there and lives there now. Guess what? Not dead. This one statement illustrates how insane this line of argument is.

Again, he was born and raised and lives in the UK. Unbelievable.