Please pray for two firefighters who lost their lives 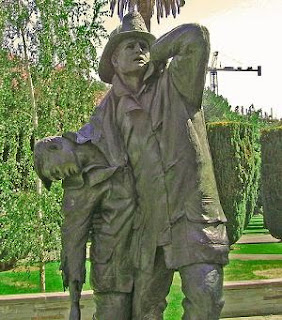 in the last few hours while fighting the huge fire 15 miles north of Los Angeles. Fire broke out Wed. and has been burning out of control. 2,800 firefighters, some from as far away as Montana and Wyoming, are working to put out the conflagration in the Angeles National Forest which is north of the city. The Flintridge-LaCrescenta area is most effected, and in the last few hours Mt. Wilson, where most of the city's television and communication towers are located is under threat, along with some 10,000 homes in the area. At least 6 towns were under evacuation orders.

The two figher fighters were in a truck which plunged off the side of a slope.

Eternal rest, grant unto them, O Lord,
And let perpetual light shine upon them.
May their souls, through the mercy of God,
Rest in Peace.

[The picture above is one I took 3 years ago. The statue is one of two which sit on the grounds of the state capitol in Sacramento in honor of firefighters.]
Posted by gemoftheocean at 8:46 AM

They rest now with God, Karen.

I always feel so sorry for the families. As a wife of a firefighter, the fear is always in the back of my mind.

Packrat, your hubby is a hero to me too!