Police state on the Way 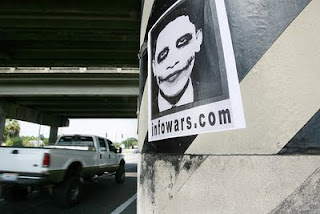 How many times in politcal campaigns, etc. do we see signs for this that and the other plastered all over cities? Yes, many cities don't let you post on public property, but do they send the police out after your butt?

They do if you diss "the won." WHO THE HELL DO THESE PEOPLE THINK THEY ARE?
"CLERMONT - Clermont police have interviewed one suspect who is admitting to putting up the dozens of posters pasted around the city depicting President Obama as the Joker character from the Batman film The Dark Knight, city officials confirmed.Assistant City Manager Darren Gray said city officials have an individual "admitting to putting up 500" of the posters.Clermont Police Capt. Eric Jensen said the male individual has admitted to putting up some signs, but investigators suspect others were involved and their investigation is continuing."We have talked to an individual," Jensen said. "He only admitted to some of it...We're still tracking down leads and talking to folks. We have not arrested anybody."
Full story here.
Posted by gemoftheocean at 5:24 PM

Labels: strike back at the obominator