Exhibit "A" of why I believe in applying the Death Penalty 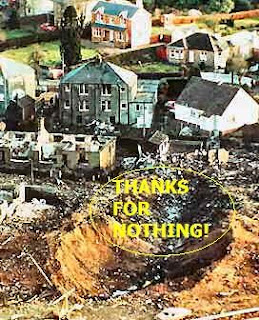 "The terminally-ill Libyan convicted over the 1988 Lockerbie bombing was released on compassionate grounds from jail in Scotland Thursday, sparking joy in Tripoli but fury from the United States."

Full story here. Sure, sure, JPII, "the authorites" will keep these bastards under lock and key. Riiiight. NO ONE should believe those lying government pieces of crap.

I don't care how sick this guy is. He should DIE IN JAIL and not in the comfort of his bed. His victims did not have that option.
[BTW, this wouldn't have anything to do with a trade agreement between BP (British petroleum) and tapping natural gas in Libya would it? Nah.... Any takers that this POS will live longer than 3 months?]
Posted by gemoftheocean at 7:33 PM

On the side of the angels said...

Karen - only problem is Magrahi probably isn't guilty - the Libyans more than likely weren't guilty - everyone over here knows the Syrians were probably guilty but Libya 'fessed because it was more economically and diplomatically beneficial to be internationally 'guilty, then forgiven' . Magrahi was an arms-dealing stooge - set up to tie-up the loose ends of the crime. He's dying of prostate cancer and will be dead within three months. he's not going to freedom , merely from a prison hospital to another hospital where his family can see him .Scotland has a mandatory law to consider all compassionate release for all the terminally ill.
Might I also remind you that you are not suggesting a death penalty [the state-authorised killing of an unjust aggressor immediately threatening the life of an individual community or nation - permissible in catholic teaching] ; you're promoting Capital punishment - and there is a difference - Killing an incarcerated criminal as a form of punishment is not only undoctrinal - it;s judicial murder and a laetae sententiae excommunicable offence.
I aint a bleeding heart liberal - but remember that the US wanted their pound of flesh - they wanted someone guilty and someone punished - they even threatened Libya to such an extent that Libya even lied about their guilt and offered up one of their own reprobate criminals to be found guilty and imprisoned. Ask yourself why most of the scottish victims' families actually approved of the release ? because they really believe that he wasn't guilty ; but in order to be released on compassionate grounds he had to confess to a crime most people believe he had nothing to do with. Releasing magrahi also allows Scottish lawyers to open up the investigation and possibly find out who the guilty parties really were - most intelligence networks/police forces etc primarily believed the Syrians were guilty; many continue to believe it.

Right. *IF* he's guilty, I'd want life to mean life (I don't believe in the death penalty - one, because it's irreversible and miscarriages of justice do happen, and two, because I honestly think that life in prison is worse punishment) - but in this case, it's *if*. It very much looks, at this point, as though he's not the guilty party. I'm not just talking about 'reasonable doubt'; it's probable that he was set up. The evidence that's been laid out in the media here is strong and compelling. The Scottish victims' families buy it, the biggest, most influential names in the Scottish legal system buy it, and he only dropped his appeal because he could not be released on compassionate grounds while that legal process was still ongoing. His second appeal would have taken a year or so to go through the system, but from what I'm reading in the papers here it would almost certainly have resulted in his conviction being set aside. Since the evidence, at this point, overwhelmingly suggests that Megrahi is a fall guy, it would be inhumane to let him die in prison while his appeal was still going through the system.

Whether the *actual* guilty party will ever be found and put on trial is entirely another question.

Seems you may be more interested in vengeance rather than truth, and justice. Just as well Christ does not treat our offences against His infinite goodness with revenge or vengeance.....at least in this life."Father, forgive them...."

If he was innocent, then he should have been set free. We do NOT want to convict "just anybody for the hell of it." Doing that undercuts the viability of the death penalty, and you want truly guilty people (of horrific crimes) to pay a penalty not some Reichstag Fire dupe. Otherwise you have to go through the whole drill again. So releasing him on "compassionate grounds" was BS. If he's innocent, then FIND him so.

You can't be partly pregnant!!!

The only "message" here was "do something heinous and some crying ass liberal will let you out when you get sick and old then laugh in their faces because you got away with something."

Refer here for reference to article by Avery Cardinal Dulles for arguments re: Catholic doctrine on death penalty.

The victims families are the ones I feel sorry for. He'll die convicted, whilst the real killers will be free. Most respected legal opinion here is the second appeal would have been succesful.