"A Marissa" as a measure of time, and grandmothers with spunk 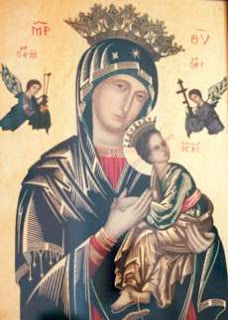 I had had a delightful conversation with my Godmother (and also my aunt) Mary on Christmas Day as is our wont. I'd asked her if she knew how my Grandmother and Grandfather (both from different parts of the Austro-Hungarian empire) had come to meet in the U.S. I'd known they met in the US, and that my grandmother had traveled from Europe alone, to go live with her sister in brother-in-law in Cleveland in September, 1920. What I did NOT know, which my aunt related, was that her sister and B-I-L were friends with a man who was a widower with small children. The intent was to match up "little sister," my grandmother, with the man. Apparently, my grandmother was rather put out by this whole arranged marriage business because she certainly didn't want, as my aunt put it "a USED husband" - a direct quote from my grammy, evidently. 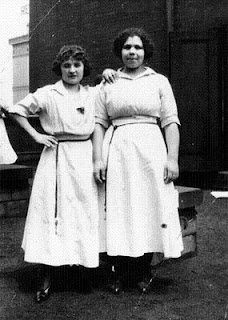 Friend, My Grandmother - chambermaids*, Cleveland, early 20s
My grandmother worked as a hotel maid (note the pass key on the long cord!) in Cleveland before she met my grandfather. She is seen in the first picture, on the right, while taking a breather with her girlfriend, another immigrant girl. She is about 20 or so in this photo. She and this same girl were walking home from work one evening, where they ran into the young man who was to become my grandfather. 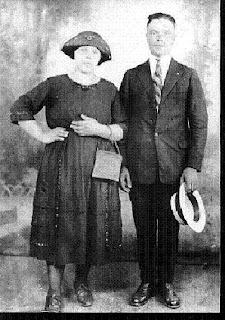 Paraskevia (Therese) Roman and Andrew Shelak early 1920s
I love the solemn expressions on both. So different from photos of modern couples. It was taken in the early 20s at a time when people had to stand very still in photos to avoid camera blur. I love the boater "poppy" is carrying. Ditto the spit shined shoes and high waters. :-D (Poppy, is there a flood somewhere?)

It's from my granddad that we get our love of the national past time. As a young immigrant he'd fallen in love with the game. Somewhere among my souveniers I have a nice picture of him as an older man sitting on bench in the sun behind their old house listing to a ballgame on a transistor radio, listening to the Phillies, no doubt. It occurs to me that as a young man it might have been possible to have been at the game when Ray Chapman (of the Cleveland team) had gotten killed by a baseball when he was up at bat against Carl Mays in 1920, only one of two times that's ever happened in a pro game. Sometime when spring rolls around and hope springs eternal, I'll do a baseball post about the family.
My aunt also mentioned that my grandfather had a particular fondness for the Blessed Mother and always measured time by her holidays. "A Marissa" - a feast or solemnity in honor of the Blessed Mother. He used the Annunciation to measure when it was time to start the planting. Until my mother, then the youngest of then 6 children, was seven, they lived on a tiny farm in Pennsylvania, (My youngest uncle Joe, was born 15 years later.) "Poppy" would do the harvesting around the Assumption and the feast of the Virgin's Birthday (depending on the crop.) and for the winter Marissa, he'd do his planning for the year.
While I've never done my planning and events around a "Marissa" I'm glad to say I measure time as well by the church calendar as much as the civil calendar. and as per tradition, my Aunt Mary will send a St. John the Baptist (Northampton, Pa) calendar to me soon. It's a calendar with all the eastern Rite days on it. My grandmother always kept one in her kitchen and referred to it all the time. I would hope most Catholic use a church calendar regularly (they certainly are scooped up very quickly!) - and may such customs help sustain us.

(* if anyone knows about which hotels there were in Cleveland in the early 1920s I'd love to know. It would appear that there is another hotel in the right background that begins with the letters "RE" - this hotel would be just a few blocks away. I must say I've always been inclined to be very generous when leaving the chambermaids a nice tip every time I stay in a hotel!)
Posted by gemoftheocean at 5:40 PM

"A used husband"--LOL! I love the old pictures.

That's what cracked me up too!