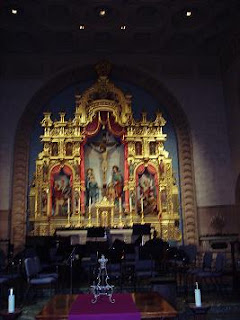 The other night I went to a really lovely service of Lessons and Carols held at University of San Diego in Founder's Hall. The chapel is quite large and serves the student body, along with the Immaculata Church which is also on the grounds.

I got there very early and took a still photo of the altar, which you see here.

Then I bagged a seat at the front against the wall. This Chapel is unusual in the US in that there are traditional choir stalls along the side walls on a slightly raised platform which runs the entire length of the chapel. By the time the service started, it was packed.
Most of the music was very traditional, beginning with a 13 minute Magnificat by Pergolesi, followed by a processional Personent Hodie (On this day the earth shall sing.) There were more than 20 in the orchestra, so there was full and rich accompaniment to most of the songs.
I got lucky with this next shot, as I took it EXACTLY when the official photographer took hers, so I benefitted from HER flash. Serendipity. 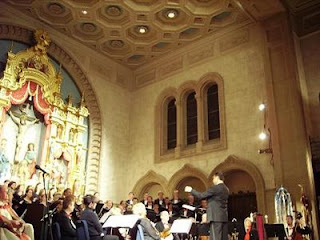 The carols between the lessons inluded Oh Come, Oh Come Emmanuel, Do you Hear What I hear? Lo, How a Rose E're Blooming (my favorite which is in the video below.) There was a Celtic Alleluia, followed by a well executed but Beauty-and-the-Beastlike incongruous "The Lord is With You" - a well meaning but wonky song between "Gabriel," "Mary," and "Joseph." Okay, if you like that sort of thing. I don't.
Joy to the World was sung, along with Angels We Have Heard On High, and What Child is This? [If I am at Mass at Christmas and they DON'T sing this I am extremely dissapointed. Okay, it's probably just me, but "Silent Night" can take a flying leap as far as I'm concerned. I've always hated it.] Somewhere in the mix was "Little Drummer Boy."

The concluding song was "The Virgin Mary had a Baby Boy" which was also incongruous, but EXTREMELY (and unexpectedly to my taste, I thought) DELIGHTFUL. It is a traditional[?!] West Indian Christmas song. I hadn't heard it before. Something about the maracca and the bongo made me want to reach for a Mai-Tai. But somehow, it was very dignified to boot! Go figure. Too bad I ran out of room for the video for that.

Below is a video clip* of Lo, How a Rose E're Blooming from the concert. There are a few people with stupid "hangings" on a pole that were in the enterance/recessional and gospel processions who pass by in front. The only *other* thing I didn't like about this service. Everything was cool except for this Bishop Brom-like feature.

[Did I tell you the man has bad taste with these tacky processional "things?" I use the word "things" in place of what I really want to call them! A thurible I understand. A crucifer and two candlebearers I understand. Weird stuff hanging on poles? Maybe it's because they couldn't do puppets. Whatever. I still don't know what they were supposed to "represent."]

I happened to be at a rehearsal a few days prior and got an up close and personal look at the actual poles. 10-1 says they were the original poles used for torches used in a high Mass given the hook I saw on one of them! At least they were a minor distraction given all the other eye candy in Founder's Hall Chapel that night.

Well worth watching if you can get the channel.

[* The video was shot by my little Vivitar camera. No, I wasn't annoying as I "guessed" where the action would be as I held it right next to my thigh so it wouldn't be obvious I was taking a few video clips. So if it's a little off center -- too bad!!]
Posted by gemoftheocean at 11:52 PM

I stumbled on your blog looking for imformation on lessons and carols. It would be so much nicer for you if you weren't so superficially critical of every third thing you saw or listened to. Is this the measure of your "conservatism"?

Great film, Karen, and one of my favourite carols! I remember Founders Chapel well, and it brought back a happy memory.

Polly, relax. I really liked it, otherwise I wouldn't have recommended it!!! Just making a note of what was jarring. I HATE reviews where just "everything was perfect." In a review I say what I like and dislike.

Hi, Fr. Sean - didn't know you made it up to Founders. It is one of the loveliest chapels in San Diego.

I too stumbled on your site and enjoyed it. I was looking for other churches that have the traditional service of lessons and carols as we did this past Sunday. I did find a very few others. Very beautifully done web page (I also have done some web work.)
Dave

Hi Dave, thanks for the comments. I didn't come to "lessons and carols" until my 30s when I discovered a video of an Anglican "LEssons and Carols" service from King's College Cambridge. it was a two hour deal. The 1st hour or so being all about he school for choristers and how the boys train. The second hour was a Christmas lessons and carols service. Simply beautiful. I don't know why more Catholic parishes don't do them. They are beautiful.

I recently came accross your blog and have been reading along. I thought I would leave my first comment. I dont know what to say except that I have enjoyed reading. Nice blog. I will keep visiting this blog very often.