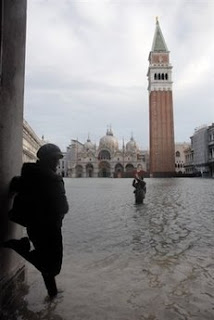 Alas, an all too common problem these days.

Yeah, but wouldn't you love to own a RotoRooter Franchise there?! [Or whatever the UK plumbing equivalent is!]

Don't forget, there is some truth behind the song "The gas man cometh..."

The only qualification most UK plumbers, etc, need is how to ask: "How about a cup of tea, love, while I get my tools out?"

As for Venice they'd look at the picture and say: "Oh, I don't like the look for that; I don't like it one bit. I'd better have a cup of tea".

Have you ever seen the film, "YANKS?" Starred Richard Gear and a bunch of others. About 3 US soldiers of different classes and they fell in love with when they were stationed in the UK during WWII. [Before Normandy landings.] Opening scene more troops coming into camp and one of the US sargeants was asking when the piping would be fixed. And the [Uk] guy is standing in a muddy trench ""I'll get right on that, soon as I've had me tea."
Sargeant "This whole island floats on tea."

Given the damp weather I can't say I blame you!

:-D I like "Nobody wants to hear about Vanessa" too. And of course the "Gnu" song. I've read before the song "Nu" was the only way it was pronounced - but after the "Gnu" song became popular, "Gah-Noo" became an acceptable way to pronounce the word!

BTW, I wonder if anyone still uses the phrase "Come up and see my etchings" anymore.

About 20 years back, a coworker and I were joshing around about "seeing etchings" (while we were gossiping about someone's proposed tryst. We both laughed, but a young, just out of college girl had NO idea what we were talking about! [We informed her - no sense walking around too young and too naive.]

'BTW, I wonder if anyone still uses the phrase "Come up and see my etchings" anymore.'

I do; which probably explains why I'm still single! ;-)

Trust me, A, you're better off without. I'm like one of those old American "Gas Guzzlers": comfortable, but expensive to run!