Tenebrae - all that and a bag of chips 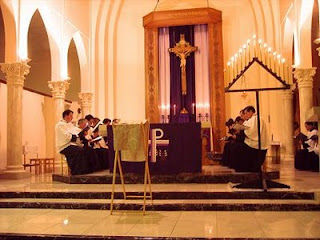 Quick note in the wee hours of Thursday - last night for the first time I attended Tenebrae. I had not heard of it as a child or in high school, but saw it in a passing reference in Brideshead Revisited. So I'd looked up the term and found it was a service that had been done in the Divine Office. I thought to myself some 35+ years ago -- well, that's something I'll probably never get to see in my lifetime.

Tenebrae was hosted by St. John the Evangelist church in San Diego. A "normal" but orthodox parish - (for the 10th year running! - and I never knew that til last year, when I couldn't go.) The Brothers of the Little Oratory, with a boost from the La Jolla Renaissance Singers Chamber Choir to add some polyphony did the honors. You can see their event link here. The candleholder in the foreground is called a "hearse." Creepy name, hun? The service is essentially 3 "nocturns" (each nocturn consisting of a combination of psalms, lessons, and an Our Father) + Lauds. There are 15 psalms in all, and towards the end of each psalm, one of the candles on the hearse is extinguished. Starting with the ones at the bottom, then working one's way up to the top candle. During the Lauds, the top candle is not extinguished, but removed and "hidden" so it's light doesn't show. Then at the end, there was a traditional banging of books to symbolize the earthquake after Christ died on the Cross. More details about the ceremony in a follow on post.

I did get a fair amount of video and I hope to upload some of it later today after I get some sleep. The service was almost 2.5 hours long, but it didn't feel that way. Event organizers were a little light on booklets to follow along, but I had my missal which had the service, and a friend had brought her Liber Usualis. Afterwards we DID end up having fish and chips.

I remarked how I'd REALLY like to grab the bunnies who'd watered down the catechism and all of the musical offerings etc. post Vatican II watered and denied us having even the option to experience a lot of Catholic heritage. Those goons didn't even TELL us about it -- and gave us junk like "Kumbaya" and "Michael, Row the Boat Ashore" instead. Well, "Quomodo sedat sola civitas plena populo"* indeed, to "YOU people."

[*I won't be a snob and not translate for those who need it: "How doth the city sit that was full of people...." - which starts the beginning of the lament from the prophet Jeremiah, which was the first lesson read. -- I can think of more than a few "kumbaya" desolate churches. And nice to see the verse I saw first quoted by Charles Ryder in context! The article I linked re: Tenebrae above notes that we know of these readings for the office in the 8th century.]
Posted by gemoftheocean at 8:24 AM