Everyone's Massah to this fool... 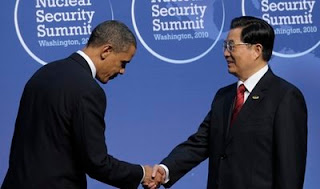 except, of course, the suffering American public. "Hey boy. Here's a quarter, geddown here and shine my shoes."

If they ever bring back Stepin' Fetchit, I have a likely candidate for the part. But of course, when he's with normal US citizens, zero always has his nose in the air, a la Mussolini.

I don't think he has a snowball's chance against a Chinaman. Was there ever ANY "president" so unversed in simple protocol? It's a wonder half the state department who deals with this sort of thing haven't committed suicide by now. "Listen, duffus. You are a head of state. Heads of state do not BOW to people. Sheesh. Moron. [How many years to retirement?]"
Posted by gemoftheocean at 1:45 AM

Labels: zero should stop acting like a pickanninny or a tyrant and try being a normal person but then he's not really one of us is he - there I went there, zero strikes again

'How many years to retirement ?' - well, the brain retired years ago, obviously; the question is how long the body will last . . .

However, let's get one thing straight : Heads of State DO bow - to the Pope.

God takes precedence, even if only by virtue of seniority.

On a serious note, I remember hearing Obama saying on his campaign trail, that he was going to change the world. I thought, "change the world? To what? Who's vision of what the world should be like? His? No, thank you!"

The American head of state bows to NO ONE! [Nor dip the flag for that matter.] Now he MIGHT if Catholic, nod his head in private, but this is not our protocol!

I sort of doubt your queen will bow to the pope.