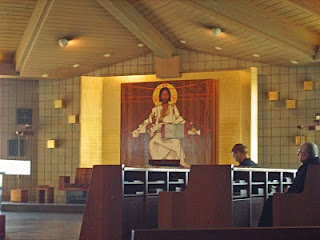 Yester-
day, on Good Friday, I accompanied some friends up to the Prince of Peace Abbey in Oceanside, Ca. There are about 19 monks in all. No video allowed in the church while services are going on, but afterward I did take a few stills inside

And afterwards went outside to visit the little cemetery. The video below is a short 360 look at the area which is just to the south of the church -- at the end fo the short video that "bright area" just on the horizon is the Pacific ocean.

The Abbey, close to Camp Pendleton, is in a really dangerous area for fire, so the buildings reflect this -- cinderblock construction. The cemetery is really touching. The picture below show 1st Abbot Claude's grave. A simple wooden cross marks it, and there is no name on the cross, as there are on the ones behind his. My friend Michelle, who dearly misses him as her regular confessor, said "he probably wanted it that way." Abbot Claude was so self-effacing. He was nearly 100 when he died. You can read a little more about him here. The flowers on the grave are simple and "drought tolerant." You can see what the grave first looked like, here. Somewhat to my horror[?] and fascination, a huge black beetle like creature was moseying right on the Abbot's grave, no doubt looking for dinner. 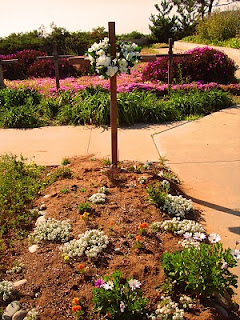 Here below is another picture - with the Abbot's grave in the foreground and the ones of 9 monks behind it. It struck me that I'd at least seen all those monks in choir at some time or other -- and that eventually, the monks currently in choir, would one day be next to their brothers in Christ, with yet unseen monks taking their places. 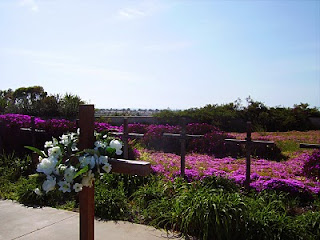 The monastery was founded about in the mid-50s -- it's about as old as I am. The first time I laid eyes on it was in the Fall of 1974 -- during my first few week as a Freshman at the University of California, San Diego. I was taking an "easy" distribution requirement for me. Music History. And where does one start with the History of Western Music? The church! So off we went early one morning to hear the monks chant the office -- and we stayed for their kind hospitality of breakfast afterwards. So the public higher education system in California did more to teach me formally re: Gregorian Chant than my Catholic high school "Kumbaya - Michael Row the Boat Ashore" years did.

Over the years I've gone up during various times of my life, sometimes in crisis, often not. But their little mountain top is a testament to the balanced life they lead - Pray, work, and still take some time off for a little recreation. And I like that they all still work with their hands. The Benedictines seem to have the perfect balance.

All of God's creatures abound. I hope the little fellow below finds that Beetle and EATS it! [Lizards are GOOD!!!!] I've yet to see the snakes, but I've been assured they are "around." 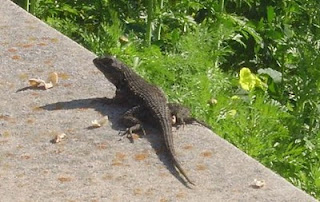 And peace be unto all of you this Easter. I go up tonight again for the Easter Vigil. 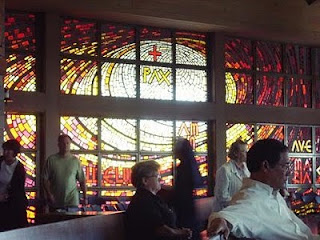 Posted by gemoftheocean at 1:08 AM

What time is that Easter Vigil Mass at Prince of Peace Abbey in Oceanside on Holy Saturday 2010?
tonirossi

tonirossi said...
What time is the Easter Vigil Mass at Prince of Peace Abbey in Oceanside on Holy Saturday 2010?

Oh, heck, sorry I missed your post - I'd just finished it shortly before you posted and left minutes after you posted. It was at 9;30 hope you made it!