Democraps have to do their dirty deeds late Saturday Night 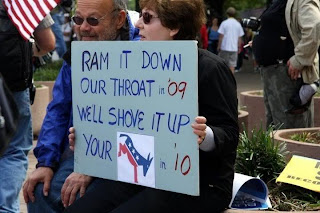 Scum suckers. They've already exempted themselves from anything they pass for us. If it's going to be so damn good, why don't they try it on their own families and they can be the guinea pigs for government rationing? Oh, that's right, they're SPECIAL.

Scratch a demo and get someone who can't remember what happened a bare two weeks ago with Cozrine getting his head handed to him, and Virginia dumping their 'Rat in charge. And Hoffman still has a chance. Seems you have to actually count votes. The sick part of it is, they are all so for their own bennies, they really don't give a damn what they do to this country. So far they've done a "nice" job with unemployment, ****ing up the dollar, and having that Jackass in chief parade around on a world apology tour.

Every Demo up for reelection needs to be thrown the hell out. And a good many RINOs too.
Posted by gemoftheocean at 1:56 AM