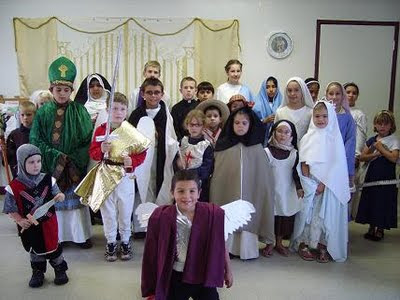 This afternoon there was a sung Mass in the church, attended by the younger kids of the parish. Each dressed as a favorite saint. After Mass there was a procession around the block, and a nice party was held in the hall with games for the kids I managed to snap *most* of then (you know how there's always those one or two kids running around or gone to ground hiding from "shyness."

Here's a bit of video of the procession which went around the block.

Can't say the kids seem overenthused about hiking around the block, but the had some fun with the games, and the holiday goodies, and getting fussed over a bit.


Big kids enjoyed the games too.

There was a nice variety of saints too, anything from Dominic Savio to St. Rita to St. Cecelia, Thomas Acquinas, St. Patrick, Michael the Archangel, etc. Had to laugh a bit at one kid's costume, papa put a bit of "gory" red daubings on Stephen the Martyr's white robe. It was sort of undercut by his green Krocs.

Nice timing on this event, because it gave the kids a chance to later go home andl likely dress up as "princess" or "pirate" or whatever, and hit their own neighborhood for more candy, and break out the pumpkin pies, pizza, scarey movies, apple cider, and "haunted" houses.
[I have to say, to my readers abroad that this "dress up as a saint" business has only been happening in the last 5-10 years, in reaction to evangelical protestants who claim halloween is "Satanic."
When I was young, the occasional kid WOULD dress up as a nun or priest or angel -- the costumes tended to run to what you might want to be when you grew up, or a fantasy character that you'd planned for weeks. Topic "A" among 5-13 year olds was "what are you going to be?" for.
Trust me, in the 40s-90s, it was ALL about the costume, candy, and inducing a bit of harmless fright by making things go "boo" in the night. It STILL is, for 95% of the people, save the weridos in SF and elsewhere who have perverted this who seem to have garnered all the attention away from a bit of innocent fun.]
I think this extra party is a nice addition to all the other things [the harmless ones!] typically done on halloween.

Check out this post, by Digihairshirt to see the best Halloween costume "evah."
[Halloween is all about creativity too!
Posted by gemoftheocean at 5:15 AM

I would imagine that the 9 to 10 years old and up were embarrassed. They shouldn't be, but they tend to be that way.

I didn't get one single trick or treater. It was an absolutely perfect night, too. Made me wish I was about 10 again - back in the days when we could run all over the neighborhood without any adult supervision.

! NOT A SINGLE KID? amazing.

I have to say when I was just out of college I lived in the Okd Town area of San Diego, on Juan St. some 30 years ago. There weren't too many houses in the immediate area, maybe 12-15, max...mostly older people, but there was some housing a few blocks away. I got some treats, because I didn'twant to be caught short. I got two little kidswith there mom, and NOT A SINGLE KID, until a high school kid came by just before nine. I gave him almost an entire bag. His eyes lit up like a Christmas tree. It was that or eat that and the other bag all by myself!

I think you hit the nail on the head regards what was MOST fun about it -- virtually NO adult supervision!!! At least from around 9 on (as long as you stayed with your group of friends, and in the 'hood, which was a given.

Too much ninny nannying RUINS this and sucks the fun out. Let the kids have their fun.

Flashlights? Check.
Stay in a group. Check
Have your butt home by nine or you're grounded until you're 25. Check.

And then you got to eat all that candy without moaning and whining from parents, unless you had idiots for parents

Now when Fr. Shipley was a yuth, it was a little different. He pleads the fifth.

Until I was 14, I lived in a town of about 35,000 people where anyone could walk anywhere after dark alone and not be afraid. We lived in a newer subdivision of said town. Almost every house had at least two children if not six or more. Everybody knew everyone else because half of us were related to each other by blood (2 uncles and their families lived on our same street not to mention just around the corner...) or marriage (cousins of a cousin type thing), and we all went to school together. No one could do anything wrong without it getting reported to parents before one got home. For example, my grandmother lived with us. She always knew who I walked home from school with before I even got in the house. So you see, I moved from that environment to Detroit. What a shock, but in some ways, I didn't have sense enough to be afraid.

As to no trickers - I'm out in the country (still at my mom's), but I thought maybe the few families up the road might stop by.

Geez, you had to get street smarts in a hurry or be dead. I lived in somewhat larger metropolitan areas when until I got to high school age. I think "small town" is more fun the younger you are -- certainly I had a lot more freedom at a younger age to go off with friends and do things. Now they're practically driving age before a lot of them are allowed to go anywhere!

Keep an eye peeled for the movie "The littlest fugitive." In Brooklyn, Bronx wherever "ma" has to go help her ailing mother (dad is daad or whatever) mom has to leave the 13 or so year old in charge of his younger brother, who runs away after his older brother and friend play a mean trick on little Joey, leaving him to believe he's accidently shot and killed his older brother.

There's about 1001 and one politically incorrect things in the movie -- enough to leave a liberal or modern day psychologist in tears. Great film.

We got no trick or treaters this year either.
Lovely All Saints party pics. Wish our parish did that.
Maybe I'll organise it next year with the Scouts to help...umm

Mum, it's not a bad idea, but I like the idea of having this on an afternoon, because it gives the kids a chance to Trick or treat the regular way -- this year was perfect because itfell on a Sat.

The one thing that was a bit off, I suspect on this one was that in one sense I suspect that some of the adults had a little TOO much involvement in that given *some* of the saints chosen, I have a feeling the parent chose it for them -- which should NEVER be the case. Have you ever known a kid to "forget" which character they are playing? NO -- they have a whole "backstory." The saint should be of the kid's own chosing, no matter how many of X saint you get -- my guess is that sucks the fun right out of it -- a couple of the kids had to be prompted for who they were. I know some "Traditionalists" might scream but to me, Oct. 31st should STILL be what it's always been -- letting the kids have creative freedom re: fantasy costumes of WHATEVER they want unless it's some misguided version of some adult perversion -- and if you've got that going you have a lot bigger problem than halloween.) Don't be swayed by evangelicals trying to suck the fun out of everything.

Digis "Rant" is worth keeping in mind. see it here.

Mind, I have nothing against this new "tradition" [what, maybe 5 odd years old, ever since the evangelicals went off the deep end?] -- but don't kill off the fun aspects of how halloween has always been celebrated in this country, before too many adults got in the picture by ninny-nannying at one extreme, or turning it into some sort of sick "adult" creation of some dark side to them you really don't want to see. Nope, this holiday is best left to the kids (with the adults assisting with those treats and giving as much free reign as possible. The kids should be the principle actors, not the adults.

BTW, I had MANY evangelical Baptist friends growing up in the 60s, there were tons in my neighborhood in Virginia -- and they and their parents would have been INCENSED had you suggested to them their kid was bordering on satanic worship.