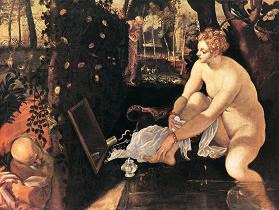 This morning I'd attended adoration and Mass at St. Anne's. I'd quite forgotten that some times of the year the EF form has quite lengthy readings. [For the daily Mass during the week outside of special seasons, the Mass goer generally suffers from a paucity of readings, but they go "big time" during Lent.]

Today the first reading was the one where the virtuous Susanna is just trying to get a private bathe in the water in her husband's orchard behind the gates, away from it all - and it turns out two judges have been watching her and waiting for when she's alone. They try and blackmail her: "lie with us" or we'll say we saw you getting it on with some strapling youth, and they'll condemn you to death. She doesn't bite, damned if she does, damned if she doesn't. But she doesn't submit to these creeps, and prays to the Lord for deliverance, Then she is condemned to death with no evidence, because the jury believes the witness of the creeps. All of a sudden, Daniel, apparently the one Jewish guy in the town with a brain, isn't buying it. He has the perps separated and questions them in turn (after insulting each) "Well, sparky, what KIND of tree were they doing it under?" Each comes up with a different answer -- the two judges are the ones that end up being executed. [I'm going to look up "mastic" and "holm" because I have NO idea what kind of trees those are.]

Well, now to the point. Some time ago a nun I know said it's always good to try and read scripture as if you are reading that particular passage for the 1st time. See if you can think of some angle you never thought of before.

It occurs to me:

1) Wouldn't it have been bad if the two judges had both randomly picked the same kind of tree?
(Which tells me that that orchard had to have a great variety of trees! IF I go to an orange grove, for instance, it wouldn't take the amazing Kreskin to guess "orange."]


2) Why does Daniel call the first guy a liar, even before he gives the answer, and doesn't wait until it's compared to the second guy's answer?


3) If he DID know he was a liar beforehand (otherwise he wouldn't have insulted him) how COULD he have known that Susanna really was telling the truth?

Susanna had dismissed her maids because she DID want to meet with Daniel for a tryst, and these two creeps hadn't seen him. Maybe she's had the last laugh all along.

JUST KIDDING.....really. I'm SURE she was virtuous, but these things do strike me as odd.

But what a raw deal women got then under the ancient Jews as compared to Christianity (and Islam, etc. for that matter.) In the last few years the Pakistanis had allowed a woman to be raped as a payback for something a member of her family did.

Contrast to the Gospel reading. The woman who was sleeping around was brought before Jesus, and the enemies of Jesus try to get Him to condemn her. Instead He points out that they all have sinned (when I was a youngster, our nun speculated to us that some say Jesus was writing their sins on the ground) -- they leave. Some take this to mean that He let her off -- well, He did the stoning, but He still told her to "sin no more."

Christianity cuts women a better deal in every way. [Except for odd outbursts from Paul, but let me not go there.] Jesus ALWAYS stuck up for the ladies. Especially even telling His own male disciples to take a hike whenever they whinned that He was wasting his time on women and or children.
Posted by gemoftheocean at 2:43 AM

Answer to #2 - Daniel is a supernatural visionary.

;-D spooky!!! [Speaking of, check out kitbrooksides site... I don't know about you, but if my home was on top of an old notorious Union prison camp...