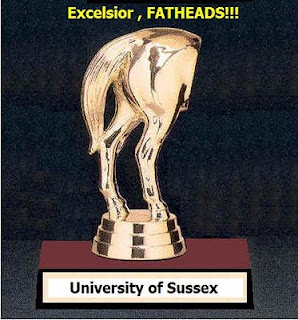 Haven't given out one of these in a while, but the occasion merits it. Apparently, due to government budget cuts, the University of Sussex (UK) has decided that its History Department will no longer do research on English History prior to 1700!

I guess it makes it easier for the Muzzies if you can gradually blot out a nation's history.

From the Daily Telegraph:

"Academics have attacked a decision by a top university to scrap research into English history before 1700.

It was claimed that the move by Sussex University risked jeopardising the nation’s understanding of the subject and “entrenching the ignorance of the present”.
Under plans, research and in-depth teaching into periods such as the Tudors, the Middle-Ages, Norman Britain, the Viking invasion and the Anglo-Saxons will be scrapped, along with the Civil Wars.

The university will also end research into the history of continental Europe pre-1900, affecting the study of the Napoleonic wars and the Roman Empire.
The university said it was “reshaping” its curriculum and research following a £3m cut in Government funding"

Geez, just shut the whole department down if you're going to do something that stupid. Move what you have left to another University. What a joke.

I suppose the Electrical Engineering department will ignore teaching "Direct Current" and just concentrate on "Alternating Current" in order to save money.
Posted by gemoftheocean at 4:52 AM

Seems to be an epidemic. UI has eliminated so many classes (in some areas), students are having a difficult time filling in classes so that they can graduate.

PS: that should read finding classes needed - oh whatever. If daughter had stayed a music major, she wouldn't have been able to graduate until she was 27 or some such!

Can that be any more stupid?

Seriously. If tried in Texas, I think they'd realize their "mistake" within about 20 seconds the first time some dumbass policeman tried this stunt. Likely he'd get his ass shot off. You can't fix "stupid."

I wonder what other cuts there were. Maybe Shakespeare being "too old" isn't taught in the English lit. department either, or those other dead white men Marlow, Wordsworth, etc.

How much you want to bet "wymen's studies" probably recieved an increase in funding, along with forcing everyone to take a "diversity" class or some such crap.

What kind of "student" would now want to sign up history at Uni. of Sussex?

What floors me is how the hell they think they can do justice to such things as "European diplomatic history." if they don't delve into anything before 1900?

Watch it, the EE department just might do such a thing, focusing on "green energy"

This is so typical of Sussex University. They've got tickets on themselves - think they're really cool. Always have done.

Just to say I've really enjoyed reading your comments on various blogs for some time - looking forward to following your blog now!