People you just want to stop!! 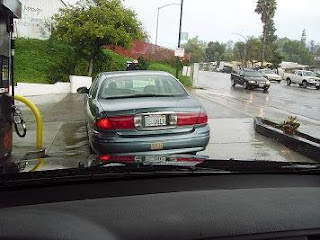 I had just pulled in to the gas station yester-
day, and I decided to wait for the nice older man getting in his car to pull out, so I could pull up to that pump, me not being a jerk, thereby allowing someone else to pull up behind me and pump their gas the same time I'd be getting mine. Usually I am impatient, but not with old people.

Then after he got in his car, I took a closer look....

COOL!!! There is another fellow in San Diego who lived in my neighborhood who had one of these plates, but I never had my camera with me before. His particular plate had a Purple Heart on it too.[Come to think of it, it was usually near the local VFW. Duh, what a surprise living in a Navy town!]

At any rate, I always feel like collaring these people and asking them to tell me their story. It saddens me very much now that the WWII generation is passing. So please, if you know elderly people, please get them talking and sharing their memories before they're gone. Even if the story isn't dramatic, but perhaps just what day-to-day life was growing up when they were a kid or young adult makes an interesting story. I don't think there's such a thing as a boring person.

Ten years ago a good friend of mine's father, Paul Reioux, still living, had received a belated Distinguished Flying Cross for services rendered in WWII. He'd been a US Army Pilot, stationed in England. He'd been coming back from a bombing run with his crew and was quite close to base, after having received heavy flak. Suddenly an oxygen tank in the nose of the plane exploded and fire quickly spread. The crew was going to have to bail out. He stayed on, while the crew bailed (except for one poor guy who'd taken his parachute off early, because he'd had a hot date that night.) He held the plane level, so they could do this. Then he got out himself and was badly burned in the process.

In the rapid turnover of war, with changing units, etc. he never got recognized for his efforts at the time, but his crewmates never forgot him saving their lives, and eventually, decades later got "the powers that be" to recognize him in the last 10 years or so. The day came, and he and his wife were living in Hawaii at the time, and a nearby base arranged for him to receive his medal at Hickam AF Base with all the attendant pomp and circumstance. His family, which included his wife and most of his 7 grown kids, attended, and at first he wondered "where everyone else is, that all this is for." [ The commanding officer of the base told him "no, it's all for you!" She was thrilled to meet him, as he was living history for her.

It was THEN, and ONLY then that he learned the complete circumstances of his mission that night so many years ago. The commanding officer had done some research and told him that him that Dec. 28, 1944 his bombing group's target was rail yards in Koblenz, Germany, being used to resupply troops in the Battle of the Bulge.

So ask away, before it's too late!
Posted by gemoftheocean at 8:33 PM

That is an awesome story Karen, thanks for sharing. There have been lots of unsharings in my own family. Thans to my Dad's genealagy research, it was only a week ago that we discovered that my great grandad, and my Dad's grandad, died fighting in the Battle of the Somme.

He was quite a bad boy before joining the army, but gave his life to save his country, and died only after being in France fo a short while, in his early twenties.

At my last parish, a member of the VFW honor guard for funerals had been a gunner's mate on the USS Maryland on December 7th.

Ukok, I'm surprised your dad didn't realize his granddad was killed on the Somme. But then perhaps he'd knew he died in battle, but not which battle.

Fr. Erik, the older guys around here really try their best to be present at all the military funerals, to make sure every old soldier/airman/sailor/etc. has the proper honors rendered, I understand it is getting hard in some parts of the country to provide this. I was glad some years back that when my dad had his funeral [he was a Korea era vet] there was a full complement of some of the older guys that were able to render a 21 gun salute. Most touching. I'm sure dad appreciated that.