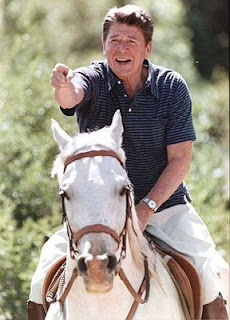 Got this in just under the wire. I will always consider Jan 20, 1981-Jan 20, 1989 some of the best years of my life - in all likelihood I will never see a president again as good as Reagan in my lifetime. He had a bold vision that Eastern Europe should be free of the shackles of Godless communism, and he lived to see it. It was both a personal privilege and an honor for me to have gotten to play a small part in that effort during those years. Some of his children were surprised by the outpouring of affection shown for him at the time of his death, including by many who weren't even born yet, or small children at the time he was in office. I wasn't the least surprised.
Posted by gemoftheocean at 5:57 AM

Love this post. I couldn't agree with you more on Reagan! Funny thing is I somehow stumbled onto your blog - I was adding to my blog profile and was in the favorite books part and wanted to add Bill Bryson. I never did. My computer screen suddenly showed me others that had Brideshead Revisited as a fave book. There you were. Not typical for conservatives. That's me. Will read and enjoy your blog!

Ha! I love Bill Bryson's work. I just finished "Notes from a Small Island" which I'd somehow missed.

Actually, I think BHR is pretty well loved among most conservatives! [Catholic ones, anyway!]