...my Quentin assisted at Mass at Blackfriars in Oxford.  He was MC on the Far Right.   Fr. Lawrence Lew was the subdeacon.  We'd not yet 'net met' but scarcely more than two months later we were secretly engaged. The occasion below was the annual Requiem Mass for Humphrey, Duke of Gloucester.  You can read what my husband had posted about it here. 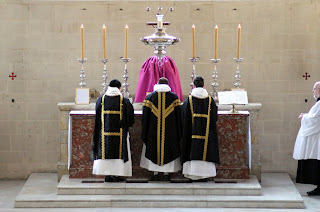 
"Now why, you may ask, should one have a Requiem for someone who has been dead for well over 550 years?

I hope everyone keeps that in mind and prays for Quentin when they think of him.

These may not be a ideal pictures of Q -  most people have hundreds of photos of their loved ones. By comparison I have relatively few.  So every one is precious. 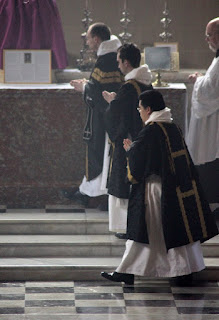 Not long after this event, he also  wrote an item called, 'Dying in Dignity'. regards his 1st wife's death of cancer.  A rather poignant bit is what he said about the pain and suffering - which he himself was to suffer less than two years later.

"My wife would have scorned to ask for an ‘easy way out’; and she would certainly never have thought of it as ‘dignified’ to seek an early death, despite the weeks of mental anguish, not to mention the physical pain involved. Indeed, when someone asked if she was afraid of dying she said ‘Of course; but it’s like Easter,isn't it – you can’t have Easter Day without Good Friday, and I can’t have the Resurrection without the Passion.’Alright, in the event (and when she was barely conscious) she was given pain relief at the end; but ultimately she died in the knowledge – and the confidence – that (to quote the hymn)

‘Long years ago, when earth lay dark and still;
Rose a loud cry, upon a lonely hill;
When, in the frailty of our human clay
Christ, our redeemer, passed the self-same way.’

She accepted that to die was only to go where Jesus had gone before her; and that there was nothing about it to be afraid of, except the fear itself : and the legacy she left behind of patient trust in God touched many people. Would they have been as impressed if she’d said ‘Oh well, if I have to die, I might as well do it now – give me the injection’? I very much doubt it."

Quentin was very brave, accepted his cancer, and not once did he voice 'why me?'    Quentin was conscious to the last and was blessed to have last rites within 15 minutes before he died, as well as having myself in attendance and his parents had just made it to our home immediately after the priest had left.  I believe it safe to say he had the grace of a happy death, though he must have suffered much.  Please keep him in your prayers.
Posted by gemoftheocean at 9:54 PM

I will say a prayer for both of you!

"however long or short a time someone has been dead, until we know they’re in Heaven, we must assume that they are still in Purgatory, and need our prayers"

As a Christian, I'm very curious... I thought that the last pope or the one before had... "abolished" purgatory, but it seems Roman Catholics still believe in it. Is this correct?

Perhaps you would consider my thoughts and tell me how prayer for folks in purgatory fits with a God who is holy, righteous and loving? If Christ's death on the Cross was insufficient to totally pay sin's penalty, then presumably purgatory is to fill the gap so to speak, supplying such punishment as is rightly required by a perfectly righteous God. So why would we entreat a just God to somehow reduce that punishment, thereby making Him a party to iniquity? If however, He can somehow do that and still be perfectly righteous, why does it depend on the prayers of imperfect, sometimes quite unloving creatures to somehow induce Him to exercise that perfect love, when those prayers are bound, at times to be unforthcoming, due solely to our own imperfect nature?

If indeed purgatory exists, then I would certainly prefer to trust my time there to my Creator and Saviour, rather than the sinners I shall leave behind and who will, at least in part forget me.

The fear of purgatory must indeed turn death from being a peaceful event in the fulfilment of one's blessed hope to a most terrible and fearful thing.

Not sure WHERE you got the 'information' that the last pope 'abolished' purgatory. ALL Roman Catholics believe this as a matter of faith. By Christ's death on the cross he opened the possibility of us going to heaven. Anyone in a state of purgatory WILL eventually get to heaven. It's a matter of that person being totally clean of whatever remaining stain of sin that person has on their soul. I'm not sure where Protestants get the idea that because Christ died on the cross for us, that suddenly we are free to not worry about our own actual sins. As Jesus said, 'not all who say 'Lord, Lord' ' will enter heaven. The way we live is supposed to reflect trying to lead as sinless a life as possible. Almost everyone at the time of their death would have at least some minor attachment to sin. Whether vanity, uncharitable acts of pettiness...things they haven't completely given up doing for the sake of the kingdom. Going through the process of purgatory eventually frees the person of any attachment to sin they had at the time of their death. You have to be truly sorry for EACH and every last sin you've committed.

"Make friends quickly with your accuser, while you are going with him to court, lest your accuser hand you over to the judge, and the judge to the guard, and you be put in prison; truly, I say to you, you will never get out till you have paid the last penny" (Matt. 5:25-26).

"Each man’s work will become manifest; for the Day will disclose it, because it will be revealed with fire, and the fire will test what sort of work each one has done. If the work which any man has built on the foundation survives, he will receive a reward. If any man’s work is burned up, he will suffer loss, though he himself will be saved, but only as through fire" (1 Cor. 3:13-15).

As to why we should ask others to pray for us?

Scripture would commend that as well:

"Therefore, since we are surrounded by so great a cloud of witnesses, let us also lay aside every weight, and sin which clings so closely . . ." (Heb. 12:1).

"And when he had taken the scroll, the four living creatures and the twenty-four elders fell down before the Lamb, each holding a harp, and with golden bowls full of incense, which are the prayers of the saints" (Rev. 5:8).

There are some on line articles re: purgatory which might help. Try here

I'm not sure what your problem is quite with people beseeching the Lord on behalf of a dead person. IF the person is already in hell -- then the prayers would not help, final judgement has been made -- if in heaven, not needed as they are already in heaven, but if in purgatory - then useful because one prays that the person will be able to release all remaining attachment to sin. You ask each other to pray for you all the time! Therefore you must implicitly believe that the prayers of the unwashed horde are in some way effective, otherwise you wouldn't bother! Many a protestant has prayed to God that Joe-Sixpack-Brother in Law gives up his attachment to getting drunk or gambling the rent money! Nothing wrong in that, I'm sure you'd agree!

Purgatory isn't something to fear in the sense that you'll be damned. If you were to be damned, you'd be in hell. With purgatory, everyone is eventually released from attachments of sin. Our souls are cleansed in purgatory so we may see God face to face without blemish.

I hope you gain more and more strength every day! Q is in my prayers, and so are you. Please keep in touch. I'm at the same address.

Thank you Gemoftheoceanfor your very considered and well-put reply.

That is food for thought and I shall do just that before any further comment.