I live just south of Heathrow Terminal 4 - and I have to say the sky is always interesting here.  It was crappy rain all day, but right at the end of the day just at sunset for a few fleeting moments, everything turned red. 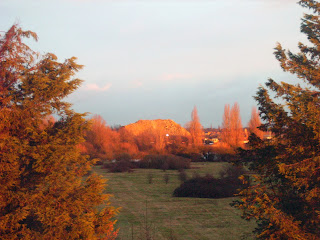 The mound off in the distance Quentin and I used to call our own little Grand Canyon, because depending on the time of day and the conditions, the color of the mound could be anything from white/gray/brown/orange, and very occasionally, like this evening, red.  I don't remember seeing it this red before.    If you blow the picture up, to the right of the mound between the poplar trees you can see the spire of the church we were married in, St. George's, Hanworth.    I took the closeup below of it last January on our wedding day. The church dates back to about 1293, though most of what you see here is more modern.  See here for a bit of history. 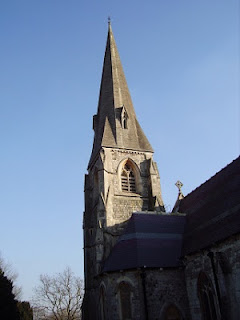 Being on the far west end of London, and so near the airport, I'm grateful for the green bits around.  The main par of the town I live in, Feltham, is just over the mound and to the left.  Feltham isn't much of a town, but I have to say it's nicely situated as somewhere to be if you want to jump on one of the M-ways.  So it's about an hour and 15 minutes or so to Oxford, about an hour to Henley, a half hour to my in-laws in Fleet (lovely little town that is) and about 15 minutes to Richmond and about 40 minutes to the Brompton Oratory, which is by the V&A museum and close to Harrods.  The train runs just behind the mound, though it's hard to see unless you happen to look right at it as its passing for Staines, Windsor, and other parts west, or come to think if it east for that matter.  Seems I always see it westbound.

Anyway, I'll be doing a few bits of 'travelogue' to catch up on all that I didn't do from when I first came over.  Haven't been gallivanting much at all this last year and some months, mainly due to looking after Q most of the time, and then wanting to save some moola.  At any rate, the town is kind of 'damn all when you get here' BUT it is pretty close to anywhere I'd want to get, which is what counts!  Only drawback is Our Lady of the Rosary out at Blackfen isn't very practical to get to, being on the other side of London, and because there really aren't any good freeways THROUGH the place, you have to go all the hell the way around on the M-25 -- which makes it about 60 minutes by car -- for what [here comes the bitch and moan] SHOULD BE a crummy 20 minute drive, Blackfen only being about 20 miles as the crow flies.  But no........it's gotta be 120 mile round trip by car, or an hour some each way by bus->train to Waterloo where you switch Trains->then catch bus to OLR.  So with wait times, and bus time tacked on closer to two hours each way.
Posted by gemoftheocean at 6:27 PM

beautiful...question is does that mean that London is keeping up with LA in the traffic sweepstakes?

Actually, when I drive, there doesn't seem to be much traffic as a rule, but then I'm off the M-ways at rush hours as a rule of thumb. Slows to a crawl. It's the CITY street driving that sucks butt. They for sure paved the cow paths. Like, say if you want to drive through a place like Richmond on a weekend through the shopping district. Stop and go and no-where to park. Too bad, because it's a really neat place. Richmond is half-way between the center of London and Windsor -- There's a big hill at the top of the town, Richmond Park, which is the Deer park. On a clear day you can see both Windsor and the Tower of London (or used to be able to see the Tower back in Tudor times there's other junk in front of it now off in the distance.) If you saw the 'Fenton' dog video, that's where that was taken. Q and I used to go there to sit up in the park when he was doing his chemo treatments. Sometimes we'd stop by for a half hour or so and watch people exercise their doggies. The deer are so tame there.

Well, I'm sorry things are still the same regarding your visa, and how it is holding up so many other important things.

re income from online work...I've heard of people who are hired to organize or run people's online presence.

We will try praying that the judge's Guardian Angel give her a nudge.