45th Anniversary of the Moon Landing 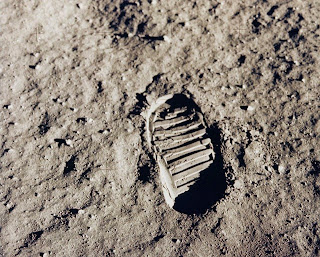 If you're old enough, you remem- ber where you were and what you were doing. I was almost 13 and living in Emmaus, Pa. Just before the start of 8th grade. It was a good summer, and I was on a softball time. All through the 60s when Gemini/Apollo were being launched, everyone near a TV watched launches and recoveries and splash downs.

All throughout the decade inventions were being made which spilled over into general technology and oh-so-many payoffs then and in the years to come down to this day. Christmastime of 68 we had Apollo 8 circle the moon, and the astronauts read from Genesis. No political correctness then. No fear of "offending the Muslims."

I remember watching during daytime when the Eagle landed, then Neil and Buzz settled down for some shut-eye, as the rest of us giddily waited, I myself can remember climbing a tree in the back yard, until night time when Neil stepped on the moon. What a feeling of pride of accomplishment as a nation. And how humble that crew was in the coming years.

Years later I worked at General Dynamics where they produced the Atlas Centaur. (and the Tomahawk Cruise missile project, which I was then on) I remember one of my bosses telling me that "back in the day" people would work their regular tasks on their defense projects, then often stay, unpaid, to collaborate with colleagues who were working atlas tasks. I'd walk through the huge bigger than aircraft hanger building in which I worked, past where they built components, and felt a sense of awe in those engineers who'd gone before us. The boss also told me (I was new then) that engineers could no longer do that, help their buddies out because of the way you had to track labor. No "freebies" if you weren't assigned. It's criminal what Comrade Zero has done with NASA. Now it's a "Muslim outreach project." The hell with that. At any rate. Where where you, and what are your memories. Because if you were old enough, you know where you were and what you were doing?
Posted by gemoftheocean at 3:46 PM